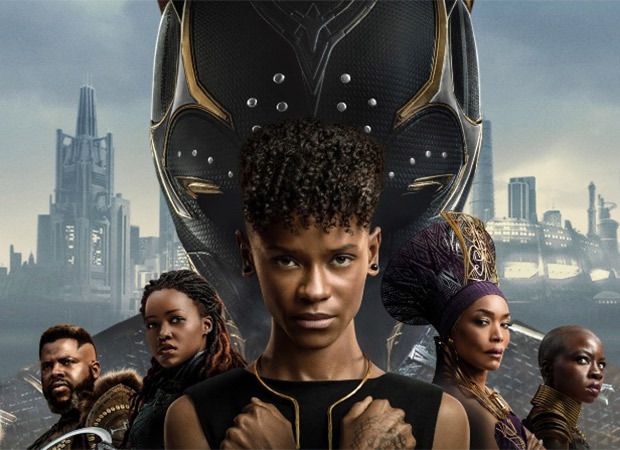 BLACK PANTHER: WAKANDA FOREVER is the story of a kingdom facing a huge challenge. After King T’Challa (Chadwick Boseman) dies of an undisclosed illness, Ramonda (Angela Bassett), T’Challa’s mother, becomes the ruler. Her daughter Shuri (Letitia Wright) is under trauma for not being able to save the life of her brother. Six months later, Ramonda attends a conference of the United Nations where various countries blame Wakanda for not being cooperative and for not providing them with vibranium. Ramonda makes it clear that the precious metal will not be shared with other countries for their destructive means. She also tells them how their facility in Wakanda was attacked. Meanwhile, the USA finds traces of vibranium somewhere in the Atlantic Ocean. A team of researchers head to the spot using a machine built by a scientist. Suddenly, mysterious creatures appear and kill everyone on board the mining ship. The chief of this tribe, Namor (Tenoch Huerta), secretly reaches Wakanda and meets Ramonda and Shuri. He informs them about the USA’s plans to extract vibranium and how it was Wakanda that exposed the world to the wonders of the metal. They are told to find the scientist who built the machine and hand it to them or else he’ll harm Wakanda. Shuri along with Okoye (Danai Gurira) head to the USA and take the help of CIA agent Everett K Ross (Martin Freeman) to find the scientist. It turns out that the scientist is actually a 19-year-old student, Riri Williams (Dominique Thorne). Both find Riri and ask her to come to Wakanda. Unfortunately, the CIA arrives at the spot. Shuri, Okoye and Riri escape from their clutches but are then suddenly attacked by Namor and his army. Okoye fights bravely but is overpowered. Namor captures Shuri and Riri and takes them to his underwater kingdom of Takolan. Namor makes it clear that he wants to kill Riri as he fears that the ‘surface people’ will come once again to extract vibranium and thus might harm his kingdom. What happens next forms the rest of the film.

Ryan Coogler’s story is very entertaining. Ryan Coogler and Joe Robert Cole’s screenplay neatly encompasses action, thrill and emotions. However, the pacing is a bit slow. The dialogues are powerful.

Ryan Coogler’s direction is neat. He had a huge challenge in hand, especially after the passing of Chadwick Boseman. However, the way he and his team made it a part of the film’s story and did justice is praiseworthy. Also admirable is how they took the story of BLACK PANTHER forward without the character that made it immortal. Knowing how sensitive the whole scenario is, the tribute given to Chadwick in the film is beautiful and in no way cheap or forced in any manner. The emotional quotient is strong while the action element is well woven. The underwater scenes enhance the appeal and offer viewers something different from the rest of the Marvel films. A few scenes are well executed like the drama at the United Nations conference and Ramonda and Shuri’s emotional talk followed by Namor’s heroic entry. The chase sequence and the action scene at the bridge are highly memorable. The Takloan sequence stands out and it’s a complete visual spectacle. The pre-climax is moving while the climax fight is impressive. The film ends on a lovely note.

Sadly, the film has a major demerit – the run time. At 164 minutes, it is too lengthy and also dragging in places. It takes away the impact to some extent. The other problem is the comparatively limited hype which will prevent the film from taking an opening like the ones taken by the recent Marvel films.

Speaking of performances, Letitia Wright is in excellent form and handles the lead part efficiently. Angela Bassett has an important role and is effortless. Tenoch Huerta is great as the villain and keeps his act restrained. Danai Gurira is dependable. Dominique Thorne is fine but has limited screen time. Martin Freeman is lovely in a supporting role. Lupita Nyong’o (Nakia) is damn good and contributes a lot to the film. Winston Duke (M’Baku), Michaela Coel as Aneka and others are fair.

Ludwig Göransson’s music exhilarates the impact. Speaking of the soundtrack, two songs stand out – ‘Con La Brisa’, played when the underwater kingdom is shown for the first time, and ‘Alone’. Autumn Durald Arkapaw’s cinematography is spectacular. Hannah Beachler’s production design is quite rich. Ruth E Carter’s costumes are appealing, especially the ones worn by Lupita Nyong’o. Action is in sync with the film’s mood and theme. VFX matches global standards. Michael P. Shawver, Kelley Dixon and Jennifer Lame’s editing could have been crisper. Ideally, the film should have been shorter by 15 minutes.

On the whole, BLACK PANTHER: WAKANDA FOREVER is a moving saga and also incorporates action and thrill in adequate doses. At the box office, it might not open as strongly as recent MCU films like DOCTOR STRANGE IN THE MULTIVERSE OF MADNESS and THOR: LOVE AND THUNDER. But with its sheer word of mouth, it has the potential to successfully emerge as a huge grosser. The minimal competition this week from the Hindi release will also go in its favour.