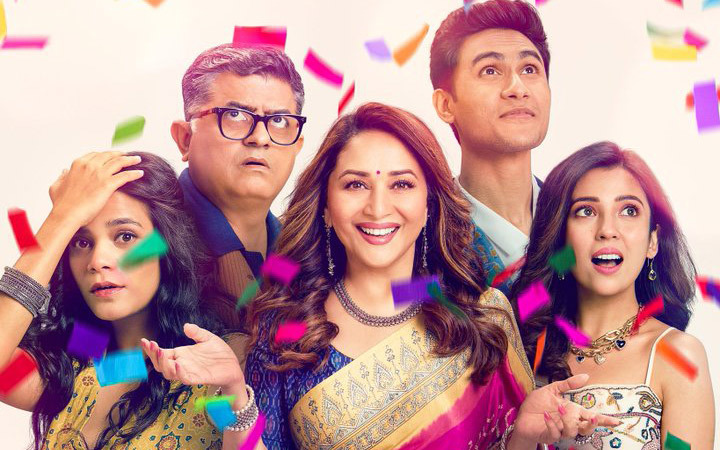 MAJA MA is the story of a ‘perfect’ woman’s dark past. Pallavi Patel (Madhuri Dixit) is a devoted housewife who lives in Ahmedabad with her husband Manohar (Gajraj Rao) and daughter Tara (Srishti Shrivastava). Her son Tejas (Ritwik Bhowmik) has gone to the USA to study and work. There, he falls in love with Esha (Barkha Singh), the daughter of the very rich Bob Hansraj (Rajit Kapur) and Pam (Sheeba Chadha). Bob and Pam are not happy with this relationship as they feel that Tejas is not at par with them in terms of class. They also fear that he wants to marry Esha for her wealth. Bob asks him to undergo a lie detector test. To Bob’s surprise, he passes with flying colours. However, he puts yet another condition – he wants to meet Tejas’s parents to make sure he comes from a respectable family. Hence, they fly down to Ahmedabad. Navratri celebrations are going on and Pallavi is the lead dancer in their residential society. Manohar is the society chairman and Viral (Kavin Dave) wants to usurp his position. He’s looking for that one opportunity that will help him in his endeavour. As luck would have it, he comes across a shocking video of Pallavi. He gets it played during the Navratri celebrations in the presence of everyone, including Bob, Pam and Esha. Pallavi’s life turns upside down due to this video. What happens next forms the rest of the film.

Sumit Batheja’s story is novel and intriguing. Sumit Batheja’s screenplay doesn’t entirely do justice to the excellent plot in hand. A few scenes are well executed and thought of. But in several places, the writing is not tight. Sumit Batheja’s dialogues are sharp as well as funny.

Anand Tiwari’s direction is decent. The setting is very authentic and gives a nice touch to the film. He also succeeds in establishing the characters, their dynamics and the confrontations that arise. A few scenes are well executed like Tejas’s lie-detector test, The Hansraj family’s first day in the Patel household, the intermission point, etc. The scene where Manohar goes to the chemist is the funniest scene in the film. Kanchan (Simone Singh), Pallavi and Pam’s outbursts are clapworthy sequences. The finale is sweet.

On the flipside, the manner in which Pallavi confesses seems forced. The blood cancer bit didn’t have any relevance and one wonders why it was added in the film. It’s also bewildering that the lie-detector test happens so late. Bob is shown to be worried about his reputation and ideally, should have gotten the test done immediately. Instead, he’s going on a picnic with the Patels, though he has made it clear that he doesn’t want to be around them till the allegations are cleared. Tara’s characterization also seems problematic and viewers will be confused about her marriage.

The biggest problem of MAJA MA, however, is that it is marketed as a clean family entertainer and this film isn’t exactly that. For example, a funny scene involves a character getting a massive erection and the embarrassment it causes to everyone around. The makers should have given a hint about these aspects in the trailers so that viewers know what they are getting into. Agreed that the film speaks about normalizing such topics. However, informing beforehand wouldn’t have harmed. Movies like VICKY DONOR [2012], BADHAAI HO [2018], BADHAAI DO [2022] etc also dealt with taboo topics but they ensured it was promoted in an apt manner.

Speaking of performances, Madhuri Dixit as always is graceful and delivers a stupendous performance. She also sensitively handles her tough character and it’ll surely be loved. Gajraj Rao as always is dependable. Her screen time is limited in the first half but he shines later on. Ritwik Bhowmik looks dashing and delivers an able performance. Barkha Singh leaves a huge mark. Srishti Shrivastava puts up a confident act. Rajit Kapur and Sheeba Chadha perform as per the requirement. Simone Singh (Kanchan) is lovely though she’s let down a bit by the character. The same goes for Ninad Kamat (Moolchand). Malhar Thakar, Kavin Dave and Shruta Rawat (Sanjana) are fair.

Songs are not memorable, except for ‘Boom Padi’. Kruti Mahesh’s choreography is beautiful. ‘Kacchi Doriyaan’ and ‘Ae Pagli’ fail to make a mark. Souumil Sringarpure’s background score is appropriate.

Debojeet Ray’s cinematography is neat and the lensman captures the mood and locales well. Laxman Keluskar’s production design is realistic. Rishi Sharma and Manoshi Nath’s costumes are glamorous, especially the ones worn by Madhuri and Barkha. Sanyukta Kaza’s editing is fine.

On the whole, MAJA MA rests on a novel premise and able performances, and also makes an important comment. However, the loopholes in the script and incorrectly marketing it as a clean family entertainer will go against the film. Average fare.