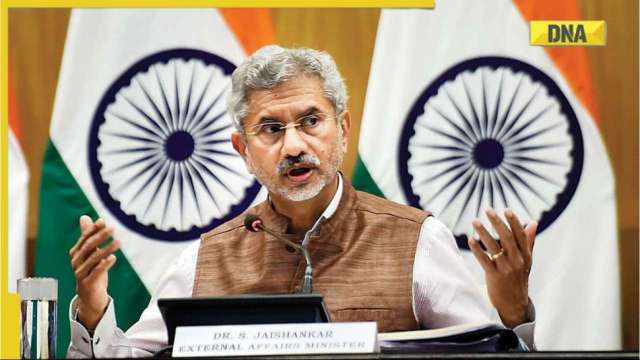 External Affairs Minister S Jaishankar is known to take jibes at Pakistan in view of the strained relationship between the two countries. This time, the foreign minister took a subtle swipe at the country, calling it an “expert in international terrorism”.

While addressing an event in Gujarat’s Vadodara, External Affairs Minister S Jaishankar in a thinly veiled reference to Pakistan, said that just as India is an expert in information technology, “our neighbour is an expert in international terrorism”, as per ANI reports.

During the event, the foreign minister of India said, “We have a neighbour.. like we are experts in IT (information technology) they’re experts in ‘international terrorists. It’s going on for years…but we could explain to the world that terrorism is terrorism, today it`s being done against us, tomorrow it will be against you.”

#WATCH | We’ve a neighbour, like we’re expert in IT (information technology) they’re expert in ‘international terrorists’. It’s going on for years…but we could explain to world that terrorism is terrorism, today it’s being done against us, tomorrow it will be against you…:EAM pic.twitter.com/zxuibuadjG
— ANI (@ANI) October 1, 2022

He pointed out that now the world’s understanding of terrorism has changed as compared to earlier times and it is not tolerating it anymore. “Countries using terrorism are under pressure and are further reluctant,” Jaishankar added.

While addressing the concerns regarding the terrorist activities flaring up in northeastern parts of India, Jaishankar gave his reassurance and said that in recent years these activities have reduced because India could achieve a land boundary agreement with Bangladesh in 2015.

Jaishankar on Saturday also said that Prime Minister Narendra Modi did not yield to the pressure amid the soaring oil prices and advised that India must do what is best for the nation and if pressure comes then face it head on.

The EAM said, “Due to the Russia-Ukraine conflict petrol prices doubled. We had pressure from where to buy the oil but PM Modi and the government were of the view that we’ve to do what is best for our nation and if pressure comes then we should face it.”

Despite the tensions caused by the Russia-Ukraine war, India has not yet put forward a clear stance on the issue and has remained neutral for both countries, urging both sides to solve the conflict with diplomacy and dialogue.