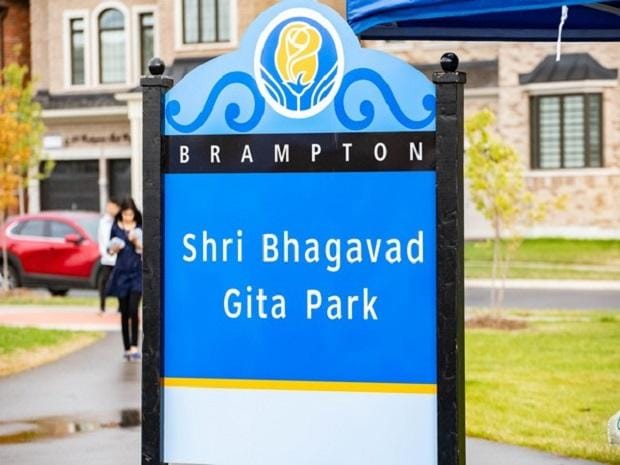 India on Sunday condemned the vandalism at a recently unveiled park named ‘Shri Bhagavad Gita’ in Canada’s Brampton and urged the authorities to investigate and take prompt action against the perpetrators of the hate crime.


We condemn the hate crime at the Shri Bhagvad Gita Park in Brampton. We urge Canadian authorities & @PeelPolice to investigate and take prompt action on the perpetrators, the High Commission of India in Canada tweeted.


The attack came days after another temple in Canada was vandalised.


Brampton Mayor Patrick Brown on Sunday confirmed the vandalism at the park and said that Canada has “zero tolerance” for such attacks.


“We are aware that the recently unveiled Shri Bhagavad Gita Park sign has been vandalized. We have zero tolerance for this. We have flagged Peel Regional Police for further investigation. Our Parks department is working to resolve and correct the sign as soon as possible,” Brown tweeted on Sunday.


On September 28, Mayor Brown said, “Today, the @CityBrampton unveiled the renaming of Brampton’s Troyers Park to Shri Bhagavad Gita Park. Brampton is a Mosaic, and this renaming commemorates the Hindu community and all they contribute to our City. We celebrate all cultures and all faiths in our City.”

On September 15, a prominent Hindu temple, BAPS Swaminarayan Mandir, was defaced by Canadian Khalistani extremists with anti-India graffiti in an apparent hate crime.


Last month, India issued an advisory to its citizens in Canada warning of increased hate crimes.