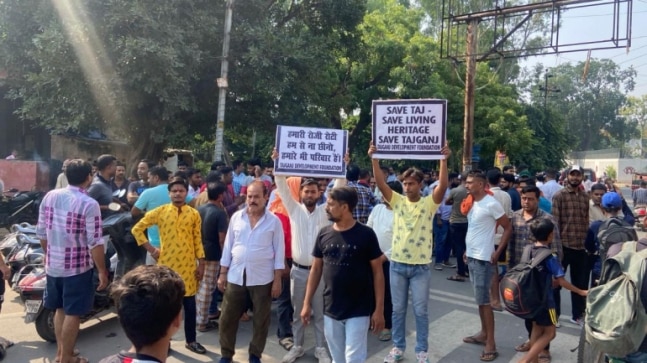 The recent Supreme Court order banning commercial activities within 500 meters of the Taj Mahal has created a survival issue for thousands of residents of the Taj Ganj area in Agra.

Over 400 handicraft shops, eateries, and hotels operate in the Taj Ganj area, which adjoins the Taj Mahal, and the SC order is bound to affect all these businesses which have been declared illegal overnight by this order.

To protect their livelihood, the shopkeepers of the Tajganj area formed a committee yesterday, electing Nitin Singh, a renowned tour guide, as its chairman. The committee will challenge the SC order, and demand that the shopkeepers be heard before any decision is taken to ban commercial activity in Taj Ganj.

Aslam Khan, a local shopkeeper said that the local MLA and former UP minister Dr. G S Dharmesh, and former MLA Kesho Mehra attended the meeting and assured their assistance to the committee. A decision was made to meet UP Chief Minister Yogi Adityanath after Dussehra and apprise him of the situation.

Answering a question, former MLA Kesho Mehra said he has assured the shopkeeper of providing all documentation about the petition filed by him in 1996 in the Supreme Court on a similar issue, and his assistance in the court case as well.

Meanwhile, the Agra Development Authority has started the survey of Tajganj in the process of implementing the SC order. ADA Vice Chairman Charchit Gaur told India Today that the SC order bans all types of commercial activities within a 500-meter radius of the Taj Mahal, and the ADA has been made responsible for the implementation of that order.

He said that four teams have been formed to survey the entire affected area. The affected area has been divided into 12 zones and every house and commercial establishment in this area is being recorded.

Hindustani Biradari Secretary Ziauddin said that during the Tajganj project, all shopfronts in the Tajganj area had been remodeled as per government guidelines to show uniformity, but now the shopkeepers have decided to remove these signboards and not allow any ADA employee to enter their shops or homes.

Agra Tourist Welfare Chamber secretary Vishal Sharma said that in the year 2000, a survey had been conducted within the 500-meter radius of the Taj Mahal jointly by the ADA, ASI, and Agra Municipal Corporation, in which, the details of every house and commercial establishment were recorded, so that any illegal construction or change of property use could be identified immediately. But this report never saw the light of day and was suppressed, resulting in the proliferation of illegal construction in the Taj Ganj area.

Now, another survey is being conducted after the Supreme Court became strict, and that could cause law and order issues in the area, as the locals are in no mood to accept their livelihood being uprooted by the ADA.