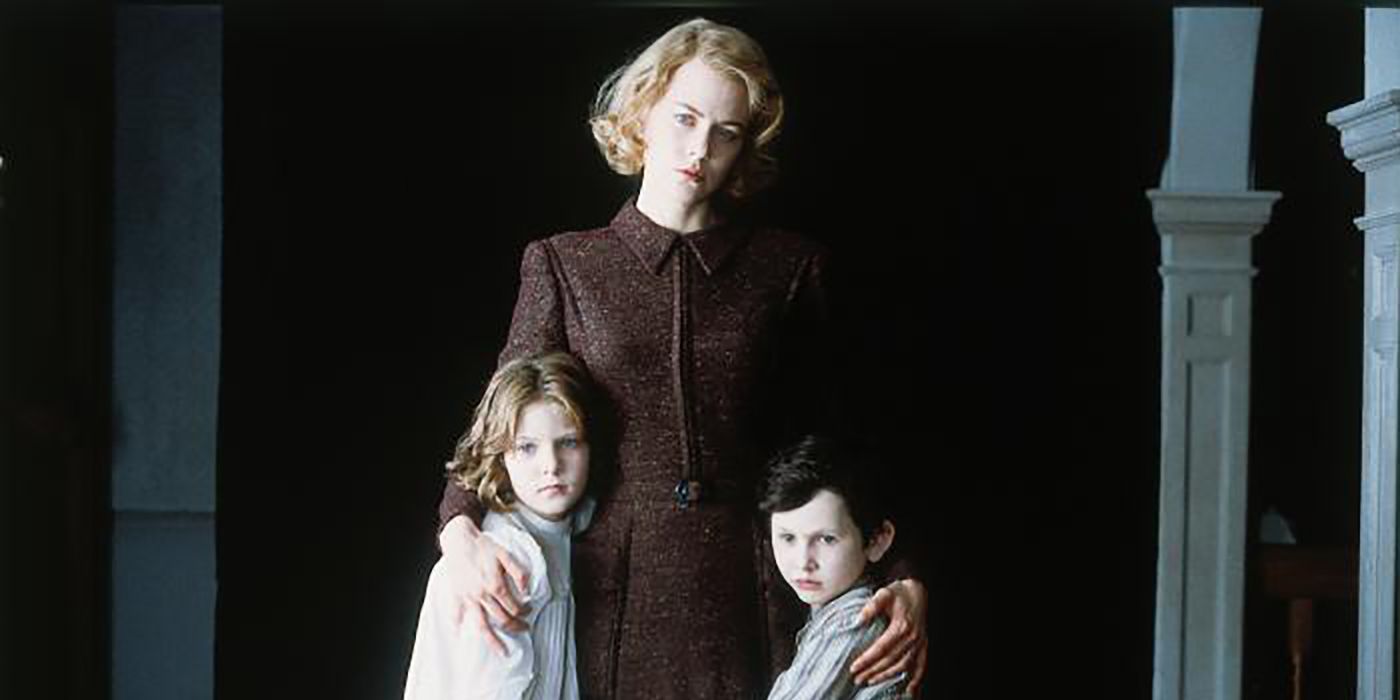 Haunted house flicks are prolific. From the age of classical Hollywood (Robert Wise’s The Haunting) through to schlocky-yet-underrated ’70s yarns such as The Amityville Horror, franchise fan favorite The Conjuring to more cerebral fare like The Shining and The Haunting of Hill House, the ghost story is a tireless movie-making springboard. It’s a genre that continues to get significant mileage out of a typically fairly straightforward concept. Unsuspecting tenants become aware of, or inadvertently stir up, vengeful, restless (and oftentimes malignant) spirits who dish out an almighty bedeviling. A lot of the time, spirited film-goers can foresee the signs, read the harbingers.

The Others on the other hand, which glided into cinemas in 2001, subverts expectations with a deft hand and one-ups viewers accustomed to predicting every narrative arc. The (quite literally) table-turning ending will etch a special place in the minds of horror aficionados for a long time to come, and it’s a credit to the prowess of all involved that the film achieves this effect. Sure, bumps in the night are scary (we see slightly different takes on the same tropes in several films a year), but a broken home quivering beneath a sheet of claustrophobia and misplaced faith back-dropped by war-torn Europe is an especially intriguing setup. Isolation is one thing, desertion is another, and nothing has been the same since the day “mommy went mad.”

Nicole Kidman‘s Grace (a finely-tuned performance) fits the mold of an unreliable narrator to begin with in much the same way the governess in Henry James‘ novella Turn of the Screw was – an obvious thematic touch-point for director Alejandro Amenabar. She is consumed by her rigid morality, is plagued by headaches which adversely affect her moods, and seems to be almost willfully ignorant of the clearly quite alarming happenings that start to encroach in on her shaky grasp of the present reality. The lines between what is real and dreamed, tangible or intangible are quite quickly blurred. Exactly what sins has she committed in her own past?

RELATED: 10 Horror Movies For Beginners To Ease Into The Spooky Genre

We also learn from the opening shots that their cavernous World War II-era Jersey Island home is shrouded in a dank mist and is incongruously large — too big to house a modest family of three. We discover that the family at the center of all of this has been abandoned. Twice. Once by family patriarch Charles (Christopher Eccleston) who took off to fight in the war, and again without warning by a cadre of servants who’d perhaps decided the desolate house and menial work was too much for them. When a trio of new servants show up (elderly gardener Mr. Tuttle, young mute Lydia and apparent ringleader Mrs. Mills) to replace the others, we hear they too have experienced their own crushing loss.

This fracturing unit have already been through the emotional trenches, and that’s why The Others is consummately interesting and beautifully poignant.We believe, given the heavy context of the times, that faith in any direction can be all one has to cling to. Given the volatility of its main character, it’s a film that dares suggest the real danger might lie right in front of us, as opposed to slinking in the shadows. Grace is dogmatic and strict with her young children (son Nicholas and daughter Anne), and the audience is given a keen sense of her tether being stretched taut as a result of her uncompromising circumstances. There are ghosts aplenty well before Anne starts drawing pictures of the spirits in the house (carefully placing a number next to each specter denoting how many times she’s seen them).

Keeping the Audience in the Dark

Grace has been sent to the brink of breaking point after being forced to fend for herself and young photosensitive children as the fog continues to choke the humanity out of her lightless household. The new servants, while diligent, appear to have an agenda of their own. Doors of all kinds are opened and shut once the defiant Anne strongly insists upon there being apparitions within their walls. As a result, Grace must then confront her headstrong religiosity, the effects of wartime paranoia and icy temperament to come to terms with the unexplainable presences flooding every passageway.

The Others resonates as an overwhelmingly refreshing take on the genre. It’s fresh in innumerable ways, but its originality lies within its emotional heft and in the way it credibly flips the archetype on its head. Mere imperiled family vs. nasty ghost tale this is not. The greatest terror the film explores is the one linked to coming to terms with new realities. Facing up to unspeakable truths takes courage, and the otherworldly souls taking over the home are actually there to shine light on a new situation, one far removed from how everything appears on the surface.

For what Amenabar does is suggest that the “ghosts” aren’t necessarily the ones to always fear — it’s the fact that these newly felt presences represent change. Something has shifted since the original servants left. There is a reason why the grounds of their home seem inescapable (evidenced when Grace ventures out onto the grounds only to be thwarted by the cold heavy atmosphere). Why is their home now a stifling prison? The titular “others” have the answers, and the lid will soon be lifted.

A Household Fraught With Tension

As the family becomes increasingly divided, they are left to fight haplessly within a sense of the world having literally run away from them (even the birds are noted to have stopped crowing). There is a constant battle between Grace and her daughter Anne, and a lot of the tension has to do with the former’s unwavering religious beliefs starkly at odds with Anne’s growing skepticism and assertion that supernatural elements are crowding their living spaces. Of course, Anne had been having interactions with the intruders a long time before Grace begins to actually buy into the idea, and the scene where she argues with the voice of an unseen boy wrings early M. Night Shyamalan levels of fear out of the viewer.

Through these tensions, Amenabar is able to create an artwork comprised of multifaceted brushstrokes. It’s a film that’ll psychologically burrow under your skin long before the intruders make their footfalls heard and whisperings audible. Grace’s blind devotion to her own set of beliefs mean she consciously tries to bury the things she sees (such as her daughter bearing the terrifying visage of a watery-eyed old woman beneath a bridal veil) as it simply isn’t in keeping with her own steadfast creed. So, we can pick and choose what is to be taken as the gospel truth, and what must be treated as fantasy? Questions such as these often arise, as an unavoidable atmosphere of impending mortality fills every room of the house.

Unlike other films easily identifiable as being a part of this genre, The Others constantly kicks the daylight out of your curiosity well. A book of the dead featuring propped up corpses further leans into the recurring idea of a refusal to let go. Grace maintains her husband will return from the war despite the assumption he’s long dead, and in a way, he does come back. Albeit not in the form she would have expected. His sepulchral reappearance, shuffling out of the fog to the score of clanking chains (brilliant foreshadowing) is very much a short-lived one. Charles’ reemergence is the first full-blown hint at what’s to come as he presses Grace on “what happened that day.” The economy of the scripting and the line delivery carry more weight than a grand piano.

A key scene — this aforementioned moment together with the servants’ concerted efforts to conceal the names on a smattering of nearby gravestones via a pile of leaves — serve as further fired shots to the nature of the impending twist ending. And admirably, in the lead-up, Amenabar’s technique is not to overspend on jump scares, but invest in suggestion, economical conversation scenes and that incalculable sense of the horrible unknown. And the first of the two big twists is expertly handled.

After their father abandons them again, Anne and Nicholas make a break for it. They plunge into the night to escape the horror show their home has been turned into. It’s here that the director ratchets the tension up beautifully — cross-cutting between two scenes, both of which lifting the sheet on who their new servants really are (or were). Moonlit gravestones eerily reflect the names of the servant trio etched into stone, confirming them as dead, while Grace notices a photo partially concealed beneath Mrs Mills’ (Fionnula Flangan) bed up in her living quarters. To her horror, it is a picture containing all three of the servants’ photographed corpses in keeping with the Book of the Dead shown earlier in the film — a superstition of the time that Mills seemed to know a great deal about…

The retrospective foreshadowing here is never heavy-handed. It’s a film you watch multiple times to retrieve subtle narrative crumbs sprinkled throughout the plot. Once the shock of the first reveal subsides, the last act terrifies, confounds and moves in equal measure. When Grace and her kids are also revealed to be dead — the core of even the most blasé film-goer will be firmly shaken. Anne caves and whispers the final truth behind the reality of the “new situation” to the old woman she has hitherto feared (who is actually an innocent but aged medium). For the reality of course, is that they were tragically killed by her mother in a fit of mania and depression. Grace begins to invisibly taunt the family we are initially led to believe are the ghosts the entire time, and it’s dizzyingly shot; terrifying even, but ultimately it’s desperately sad.

In no other modern haunted house film has the rug been so firmly and effectively yanked out from underneath the viewer. The “ghosts” at the center of the tale are of course the family we’ve been siding with the entire time, and the role reversal device caps off a stunning film. The Others earns its scares and seeks to illumine the ghosts of the past we all often try to suppress. It’s built upon the horror of desertion, the pain of loss, and the dichotomy between denial and acceptance. The air of resignation behind Grace’s utterance of “Where are we?” encapsulates the film’s haunting invocation of an irreligious limbo — a sense of no longer knowing one’s place.

The Others is superbly made and a cornerstone for cineastes looking to be surprised and moved on various emotional levels. Of course, most of us are used to guessing certain things with flicks of this ilk. Far from the case in the melancholy, foggy world Amenabar creates.