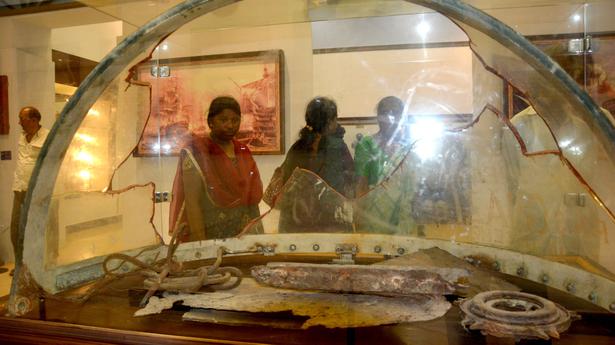 During World War II, a Japanese submarine with the Imperial Japanese Navy number RO-110 off the coast of Rambilli village on February 11 or 12, 1944.

During World War II, a Japanese submarine with the Imperial Japanese Navy number RO-110 off the coast of Rambilli village on February 11 or 12, 1944.

The city of Visakhapatnam is known for being the home for the Eastern Naval Command, having the largest integrated steel plant and a 1,000-year-old Simhachalam temple. But one thing that has put this once sleepy fishing town into the global map was the sinking of Pakistani naval submarine  PNS Ghazi off the coast of Visakhapatnam on December 4, 1971.

Ever since, December 4 is celebrated as Navy Day and a monument ‘Victory at sea’ adorned by an eternal flame stands tall on the Beach Road.

But the sinking of  PNS Ghazi is a known story and in fact in 2017, Sankalp Reddy had done a film  The Ghazi Attack, starring Rana Dagubatti, Atul Kulkarni and Kay Kay Menon.

Though many controversies shroud the sinking of the Pakistani submarine, the common theory that stands good was that the boat was sent by the Pakistani navy to sink the Indian Aircraft Carrier  INS Vikrant. Wrong feeding of intelligence inputs and some clever manoeuvre by the then chief of the ENC Vice-Admiral N. Krishnan and the top brass of the Indian Navy and RAW (Research and Analysis Wing) led  Ghazi to Visakhapatnam, which was apparently sunk by  INS Rajput, an R-Class destroyer, with depth charges. The story is, however, disputed by many.

Whatever may be the mystery,  Ghazi was sunk on the night of December 4-5, 1971, and still lies with its 93-men onboard, including 11 officers, a few hundred metres below the surface, just a few nautical miles off the coast of Visakhapatnam.

PNS Ghazi is not the only submarine that lies on the floor of the Bay of Bengal, near Visakhapatnam coast. During the Second World War, a Japanese submarine with the Imperial Japanese Navy number RO-110, was sunk off the coast of Rambilli village on February 11 or 12, 1944.

The submarine was sunk by  HMAS Launceston and  HMIS Jumna, using depth charges. The RO-110, was a mid-size coastal submarine, and was launched on January 26, 1943, at the Japanese port city of Kobe.

With its base at Penang, Malaya (Malaysia), the submarine was assigned for patrol duty in the Indian Ocean and Bay of Bengal. But during its short stint of about one year, it created quite a havoc and was dreaded by the allied naval contingents that passed through this region.

As per the naval records, on December 14, 1943, it torpedoed a British 4800-ton armed merchant ship Daisy Moller, which was en route from Bombay to Chittagong via Colombo and Vizagapatam (Visakhapatnam, as it was then called).

The ship was sunk off the coast of Katrenikona village in Amalapuram mandal, then part of East Godavari, now part of Dr. Ambedkar Konaseema, after the recent bifurcation of the districts in AP.

There are stories that only 14 out of the 127 crew survived and another version says that only 16 had survived out of 71 crew.

As per the naval records about 13 of the 16 came ashore somewhere near the Krishna River Delta region, after drifting for about 80 nautical miles and three were rescued by the fishermen.

There is also a theory that after hitting the ship with torpedoes, the submarine had surfaced and it rammed into the lifeboats and also opened machine gun fire on the marooned sailors and officers, which the Japanese deny and there is no confirmation on it.

As per a research by Mr. Edward Paul, history chronicler of Visakhapatnam and member of INTACH- Vizag Chapter, between February 11 and 12, 1944, RO-110 had attacked a convoy of the allied forces that was bound for Calcutta via Colombo, and a British merchant ship Asphalion was hit by two torpedoes released from the Japanese submarine. Though six crew members had died in the attack, the ship did not sink. Thereafter, the submarine was chased by the warships HMAS Launceston and HMIS Jumna, and finally the hunter was hunted off the coast of Visakhapatnam.

As per Mr. Paul and a retired officer from the submarine arm of the Indian Navy, the Imperial Japanese Navy on March 15, 1944, declared Ro-110 to be presumed lost with all 47 men onboard.

We have two submarines lying at the bottom of the sea close to our coast and apart from investigating Ghazi briefly, we have not touched the Japanese submarine, as we (naval personnel) believe that they are the final resting place for the brave souls and we let them rest in peace, said the submariner.