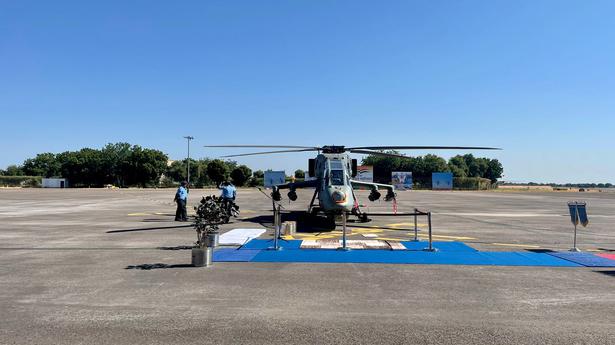 The Indian Air Force (IAF) on October 3, 2022 inducted the first fleet of indigenously-built Light Combat Helicopter (LCH), which has been developed primarily for mountain warfare after a requirement for it was felt during the Kargil war in 1999.

The fleet comprising four helicopters was inducted into the IAF at a ceremony at the Jodhpur Air Force Station in presence of Defence Minister Rajnath Singh, Chief of Air Staff Air Chief Marshal VR Chaudhari and other senior military officials.

Chairman and Managing Director of HAL said “Four LCH have been delivered to Indian Air Force, and four more will be delivered within this financial year.”

“The induction of LCH marks a new chapter in the IAF…. The LCH is at par or better than similar attack helicopters available globally,” said IAF Chief Air Chief Marshal V.R. Chaudhari.

The IAF chief said “Selection of the Unit have been specifically selected based on professional competence to ensure quick operationalisation.”

Speaking at the Induction Ceremony of Light Combat Helicopters (LCH) in Jodhpur.
https://t.co/7lQ6yYpNAG

The LCH would be effective in hitting enemy infantry, tanks, bunkers, drones and other assets in high-altitude regions, military officials said.

“Subsequently, the IAF and HAL began exploring the possibility of developing the platform with a capacity to carry an adequate weapon load, sufficient fuel and still be capable of operating in the higher reaches of the Himalayan ranges,” said an official.