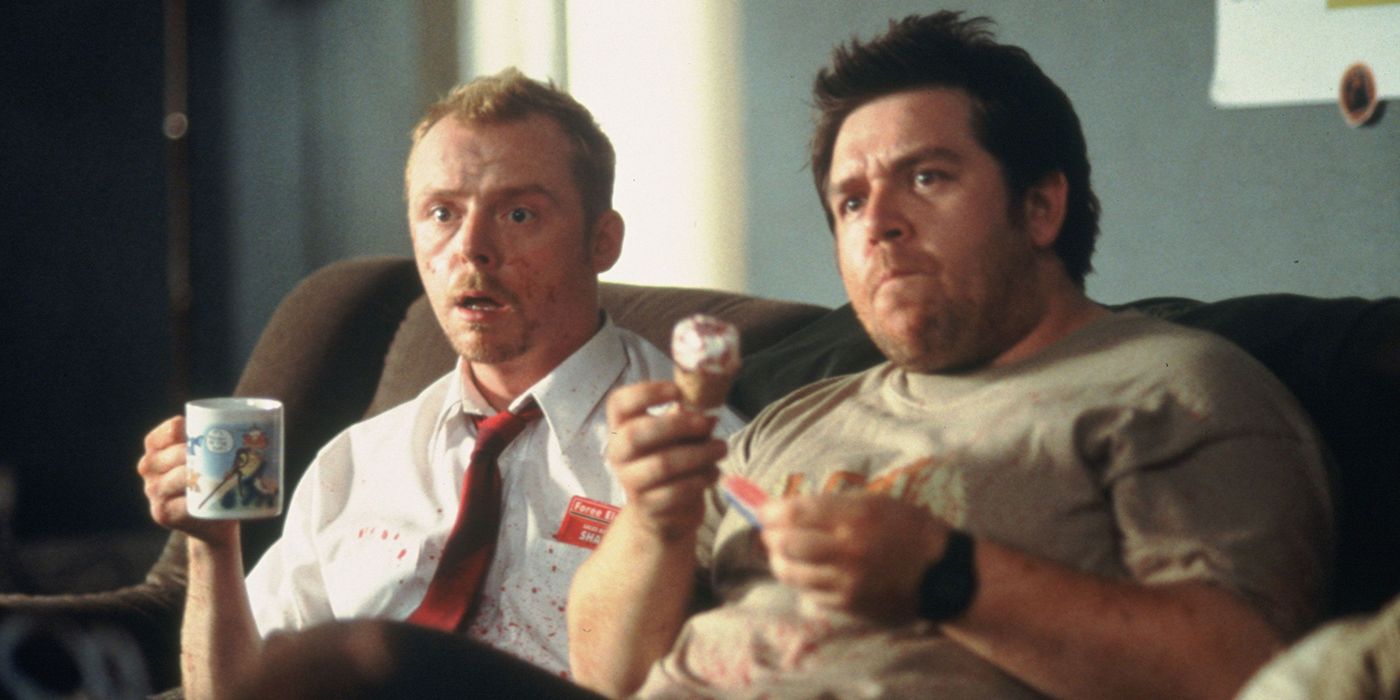 At the core of Edgar Wright’s horror-comedy Shaun of the Dead is a message: growing up can be a bit of a nightmare, but with the right friends by your side, it might just be okay. For emotionally-stunted slackers everywhere, the film is a rallying cry to arms. It isn’t and can’t be enough to wade through life in complete indifference. Occasionally you have to show up for those that need you. The film, which is equal parts a satire of the zombie genre and an outright celebration of it, is also a damn fine comedy film, one with a hell of a lot of heart to boot. Equal parts Dawn of the Dead and Wright’s own Spaced, Shaun of the Dead is gruesome, funny, and quite often poignant. By the time the credits roll, two things will be clear: there’s something truly special about the power of friendship, and maybe, just maybe, growing up won’t be all that bad.

Shaun (Simon Pegg) is the ultimate slacker, one much more content with sitting around, drinking beer, and playing Timesplitters 2 with his friend Ed (Nick Frost) than he is focusing on his career or his relationship with his girlfriend Liz (Kate Ashfield). He’s perpetually stuck in his state of immaturity, unable and unwilling to step up into the typical expectations and responsibilities of adulthood. He’s unable to make a “proper” date with Liz, one where Ed isn’t busy polluting the air with all his crassness — y’know, something a bit more romantic — and Shaun’s subsequently dumped.

A Friend for the End of the World

While it would be too much of a scapegoat to blame Ed entirely for Shaun’s professional and romantic immaturity, he does deserve some credit for Shaun’s directionless life. Shaun’s flatmate Pete (Peter Serafinowicz) recognizes Ed’s negative influence on Shaun’s ambition. He tries to convince Shaun to kick Ed out of his life, but he only comes off as sort of a bully. After a night at the pub, Ed and Shaun return home in drunken haze, flipping on a vinyl and boogieing down to Man Parrish’s “Hip Hop, Be Bop (Don’t Stop)” at “4:00 in the fucking morning,” as Pete so succinctly puts it. See, Pete’s got responsibilities, Pete’s got places to be, Pete’s got a job, but Shaun? This is pretty much as good as it gets.

RELATED: ‘Shaun of the Dead’ Is Better at Scaring Us Than Some Traditional Horror Movies

Even if Pete’s a bit of a snob, he’s actually got a point. Is Shaun’s life of binge-drinking, record scratching, and exuding general aloofness enough? Can’t there be something more? Shouldn’t there? His dead-end job selling electronics brings him no joy. Few to none of his youthful coworkers respect him or his quasi-authority. Still, Shaun’s necessity to grow up and his friendship with Ed are at odds with each other. Liz, a positive influence on his life, wants to push him towards being more reliable, more present. Ed, on the other hand, doesn’t want to let go of the childish lifestyle that he shares with Shaun, and Shaun doesn’t want to, either. In a sense, by maturing, he’d be betraying Ed and the friendship they’ve shared “since primary school.”

Ultimately, Shaun’s unhappy with his life, but Ed allows him a brief refuge of happiness every now and then. They are best friends, after all. Ed’s orangutan impressions, impeccably-timed farts, and quippy one-liners are good for a solid laugh, and after so many years of friendship, he and Shaun are tightly intertwined. To grow up and abandon Ed would be a betrayal, and so Shaun stays stuck in a rut out of loyalty to his buddy.

The difficulty of preserving and maintaining a friendship over the years lies in the inevitable changes that overcome the people involved. It’s human nature for two friends to split in different directions in life, with the transformative growth that awaits most people in the late stages of their adolescence serving as a prerequisite to true adulthood. Think about your high school friends and ask yourself how many of them you’re still close with. Was there a falling out, or did it just happen naturally, gradually, like a slow fade between frames where suddenly somebody’s no longer there?

That’s part of Shaun’s dilemma. Ed’s one of the few people still in his life from the proverbial good ol’ days. Pete’s still around, sure, but he’s turned into a bit of a wet blanket when it comes to late night carousing. Would it be fair to exorcise Ed from his life simply because the lad is a bad influence? Ed’s charming in his own sort of way, he’s generally a decent guy, and at heart he does care about Shaun…even if his perception of what’s good for a person is completely out of whack. Ed’s loyal. Ed’s got Shaun’s back when trouble arises, and the least that Shaun could do is return the favor. Yet, shouldn’t he do some serious maturing in order to sort his life out and decide who it is that he wants to be?

It ultimately takes a zombie invasion for Shaun to own up to his faults and acquire a new sense of responsibility. He steps up to the role of hero with seemingly little difficulty, taking control of situations in which others are drowning helplessly. Say what you will about Shaun, but he is a man with a plan (“take car, go to mum’s, kill Phil, grab Liz, go to the Winchester, have a cold pint, and wait for all of this to blow over”).

When he goes to Liz’s later, just as he’d planned, he’s met with some understandable skepticism. Liz seems to think it’s only a ploy for Shaun to win her back, and she isn’t interested.“This isn’t about you and me, it’s about survival,” he tells her, and it’s clear that he actually means it. It’s not about winning her back at all. He genuinely wants to save her life regardless of how their relationship fares afterwards.

Shaun’s resourcefulness and quick-thinking repeatedly prove him to be a natural leader during this nightmarish reality. When the group gets surrounded by an overwhelmingly large horde of ghoulish zombies, it’s Shaun that once again saves the day through his quickly-conjured idea of pretending to be undead in order to pass through unnoticed. Later, once the plan falls through, Shaun risks his life to distract the creatures in order to allow the others to escape.

In terms of the rom portion of this rom-zom-com, Shaun and Liz are slowly brought back together through their shared tragedy. Shaun proves himself to be able to grow up after all, but where does that leave Ed? Is he really going to keep holding Shaun back now that Shaun’s finally proven himself capable of growth? Well, no. He gets bitten by a zombie and becomes infected by the virus in a tear-jerking farewell scene between the two buddies. Ed is left to die among the invading zombie hordes while Shaun and Liz are to escape by the Deus Ex Machina of the miraculously arriving military.

For Shaun to leave Ed in order to continue his life with Liz is both literal and metaphorical. Ed, although a character of his own, is also a symbol of Shaun’s indifference and his slacker attitude that gives him little direction to follow. Shaun’s life of spending virtually every hour of his free time at the Winchester downing pints and listening to the same old jukebox hits has predictably gone stale. Without Ed’s encouragement, or without his own comparative growth, Shaun would remain stuck between the two worlds of doing nothing and wanting more.

Of course, the film ends in comedy rather than tragedy, and as it turns out, Shaun and Liz live a happy life with a virus-plagued Ed being kept in the shed. When time allows, Shaun sneaks off to play a few rounds of TimeSplitters 2 with his old buddy, just like old times. It’s a bit of comedic brilliance that zombified Ed is hardly different from regular Ed. Both sit around, mumbling a bit, always hungry, content to sit all spaced out while playing some video games. Maybe he needs to get chained up for the general safety of humankind everywhere, but it’s not like he would have been going anywhere—besides, perhaps, the pub.

As Queen’s “You’re My Best Friend” booms over the soundtrack while the two pals spend some quality time together, the film makes its message clear. One can grow up and have the mature life they want or need and keep their sluggish, unmotivated friends. One just has to know where to draw the line and where to separate the two. After all, growing up can be hard as hell, but it’s damn necessary.