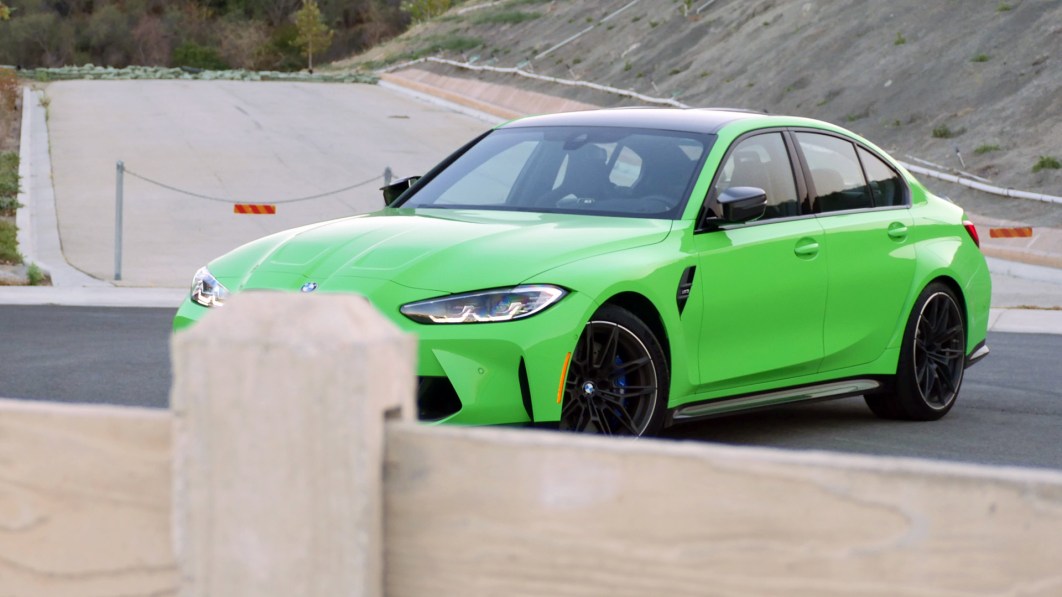 MALIBU, Calif. – Encinal and Decker Canyon roads are serious challenges for anything on four wheels. They are impossibly tight, twisting and demanding of the driver’s attention. Bigger vehicles merely survive these roads, including those with otherwise exemplary performance credentials. The 2022 BMW M3 is definitely not a small car, as the latest G80 3 Series generation has swollen to proportions comparable to the time-honored E39 BMW M5.

Despite this, the M3 delicately danced through the incessant series of back-and-forths thrown at it by these demanding Malibu driving roads. Nary a yellow line was crossed, nor a crumbling rock wall grazed. Credit goes to the steering here, which is not something that’s been said about a BMW since … ah, I’m struggling to think of something since the E90 BMW M3. This version is much different than what was found in that V8-powered masterpiece, however. This steering is considerably lighter in effort. Some might say too light, but I’d say they’re wrong. Heft does not equal sporty. You don’t need to muscle this car, you can steer it precisely with your fingertips. A Porsche is like that, too, and although the M3 doesn’t quite rise to that bar in terms of feedback, this is a delightful new horizon for BMW that hopefully trickles down to everything else in its fleet.

Now, like seemingly every car these days, there are adjustable drive settings. BMW makes it very easy to set them as you like them, with a dedicated “Setup” button on the center console and two red paddle buttons on the steering wheel that can be preset with a mix-and-match setup of your choosing. M1 became my daily driver setting (everything in Comfort except steering because, despite what I just said, I preferred a little more heft and sharpness on center than the Comfort setting), while M2 had most elements in the most aggressive setting. The engine and suspension stand out by adding an extra Sport Plus option beyond Comfort and Sport, and while I opted for that with the engine, I left the suspension in the middle-ground Sport. The roads were just too bumpy for the firmest setting, which is more an issue of maintaining chassis composure around corners than protecting my spine.

Speaking of which, the new M3 deserves a huge round of applause for its ride comfort. I drove it from just north of Malibu down to San Diego and back (about 280 miles) on L.A.’s buffet of crap pavement, and was blown away by how capably the adaptive suspension sopped up everything thrown its way. I’d drive this M3 across the country tomorrow if I needed to, no second thoughts. This is in contrast to the BMW X3 M Competition and its rock-hard ride that I didn’t want to put up with for more than a block.

Surprising comfort points also go to this M3’s $4,500 M carbon bucket seats, which proved their long-distance support despite their tight bolsters and relative lack of padding. Hard seats do tend to be more supportive. That all said, these seats are ridiculous. You can see through them for starters: at the shoulders, in the backrest and on the bottom bolsters, which look like a Porsche Cayenne’s grab handles rather than seat bolsters. They’re also made out of carbon fiber with scarce padding, which means you need to be very careful climbing into this car. Your thigh or more precious bits might be in for a rude welcome. Getting out is hardly graceful, either. Then there’s the weird mid-thigh support, which I suppose helps keep you in place through corners, but you’d have to have awfully skinny legs for it not to start digging into your thigh while using the clutch.

Oh yeah, and this M3 had the six-speed manual transmission. That means it has 473 horsepower rather than the automatic M3 Competition’s 503, plus a 0-60 time of 4.1 seconds achieved by a pro driver versus 3.8 seconds achieved by almost anyone with a right foot. Do I care? I do not. For bombing around Malibu mountain roads, for taking a grand-touring road trip or for just driving to the grocery store, I’ll take the manual, please. Thanks to BMW for continuing the option. It’s quite easy to drive, with an easily modulated clutch, slick-for-a-BMW gearbox (the throws will forever be too long and rubbery for some) and pedals placed perfectly for blipping the throttle. Automatic rev-match downshifting is also among the options you can select in those drive mode presets  and, as usual, it works very well at ensuring perfect downshifts every time.

As for the engine, there’s no denying that it possesses the performance goods with those 473 horses and 406 pound-feet of torque flowing through the rear wheels only. It feels like a just-right amount of power, versus the sort of silly, when-are-you-really-going-to-use-this excess of so many turbocharged engines today. It also sounds quite good – I actually turned off the M Sound Control enhancement that just seemed to add pressure to my ear drums and make the engine’s hum louder rather than its bark – but this isn’t the most sonorous of engines by M3 standards. You don’t wring it out just to hear it, as you would pre-turbo generations. But that’s OK, things move on.

Finally, let’s have a word about the paint color you see here. If you’ve perused the M3 configurator on BMW’s website, you’ll note that Verde Mantis is not among the choices. That’s because it’s a custom order through the wonderful BMW Individual program. Beyond that, it’s not even listed among the suggested choices on the BMW Individual “Visualizer.” It’s quite the color, which is a sentiment I heard an awful lot while driving this M3. I’m a big fan of vibrant colors on relatively subdued cars, though, so I have no qualms about it as a choice even if it’s not quite my cup of (green) tea.

Of course, a not-very-subdued color is probably a good idea as it draws attention away from the car it’s slathered in. Some say the M3’s giant nostrils have started to grow on them, but so will mold if you give it a chance. It’s hideous, and it would absolutely prevent me from buying this car despite it otherwise being one of the best cars I’ve driven in recent memory. It would be a top 10 … but that face.