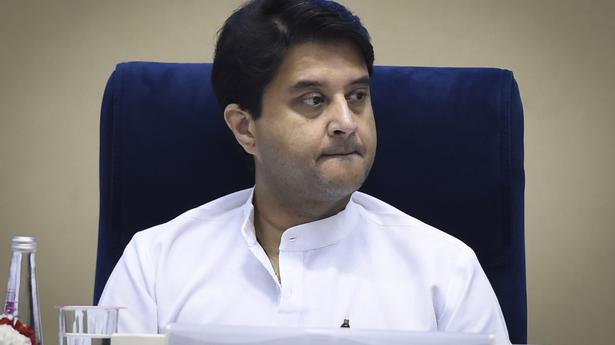 Power centres exhibit camaraderie on either side of ‘confidential’ meeting in Ratapani, amidst buzz of changes in organisation and government

Power centres exhibit camaraderie on either side of ‘confidential’ meeting in Ratapani, amidst buzz of changes in organisation and government

Top leaders of the Madhya Pradesh unit of the Bharatiya Janata Party are closing ranks ahead of Prime Minister Narendra Modi’s scheduled visit to Ujjain next week.

On their way to a core group meeting to assess preparations for the visit as well as to take stock of the 2023 Assembly election plans, Union Minister Jyotiraditya Scindia surprised his supporters gathered at the Bhopal airport on Saturday by asking them to garland his Cabinet colleague Narendra Singh Tomar. The two, political heavyweights of the Gwalior Chambal region, are known to have had differences in the past.

The complex history between the two dates back to Mr. Scindia’s days in the Congress and had more recently come to the fore during the tussle for tickets for the civic body polls earlier this year. The BJP went on to lose both mayoral seats in the region.

Mr. Scindia also visited Chief Minister Shivraj Singh Chouhan’s residence where they planted a coconut sapling together and later shared the picture from their respective Twitter accounts. The duo also reportedly travelled to the core group meeting in a forested area of Ratapani in Raisen district in the same car.

This comes close on the heels of two Ministers of Mr. Chouhan’s government, Mr. Scindia’s loyalists who had switched over to the BJP with him in 2020, expressing their displeasure with the functioning of the bureaucracy – an indirect dig at the Chief Minister.

A day later, on Sunday, Mr. Chouhan drew praise from former Chief Minister Uma Bharti. At the launch event of a de-addiction campaign also attended by yoga guru Ramdev, she lauded Mr. Chouhan for launching the campaign and for “developing the State in tune with human values”. In September, Ms. Bharti had attacked her own government saying that caste and regional imbalances were plaguing Madhya Pradesh.

A BJP source said the thaw in equations was triggered by the national leadership. “It has been conveyed to all factions that next year we face elections and we can ill afford to present a divided house,” said the source.