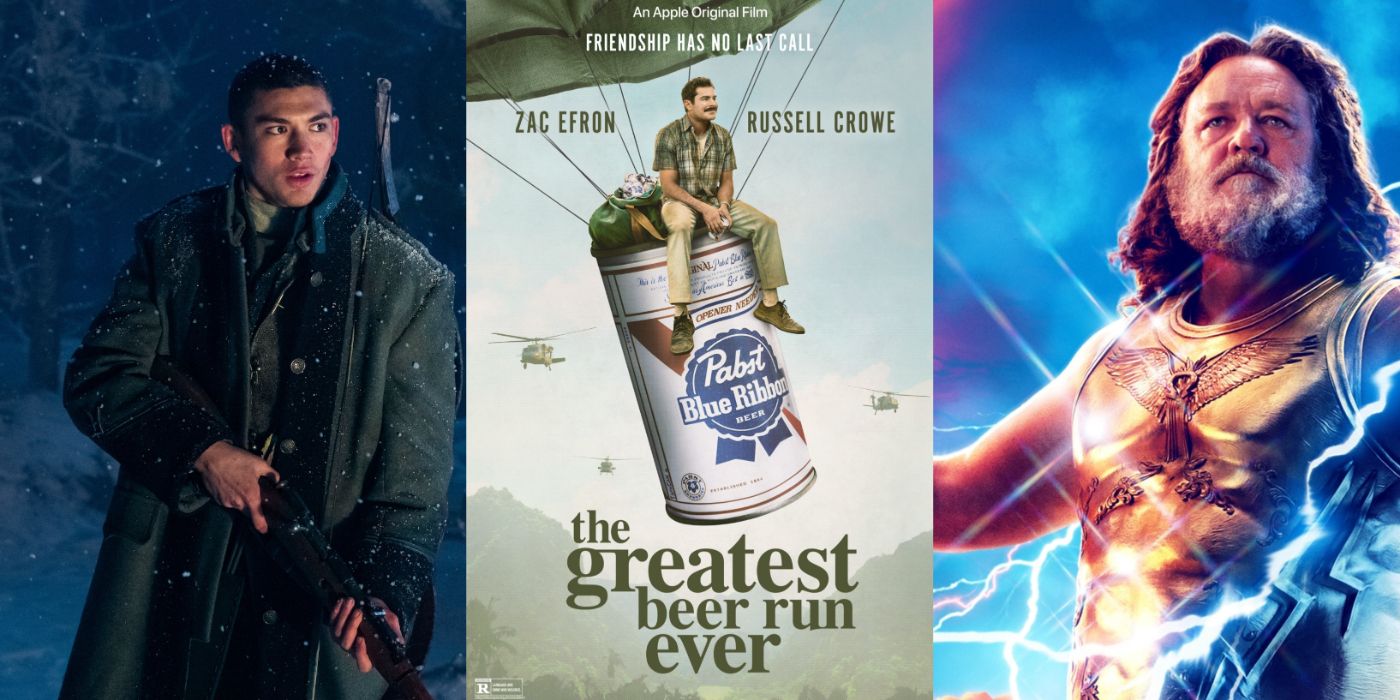 The Greatest Beer Run Ever is an Apple TV+ original and commits to offering a new take on the Vietnam War, addressing the violent war with a happy-go-lucky narrative. The film is directed by Oscar winner Peter Farrelly and could open the door for great underrated actors such as Zac Efron to join the Oscar conversation.

Based on an unbelievable true story, the film counts on a cast full of stars to tell the story of Chickie and his goal to personally bring American beer to his friends fighting in Vietnam, a journey that will change his perspective of life entirely.

The Maze Runner is a dystopian franchise based on a series of best-selling books. The first film offers a thrilling premise, dealing primarily with world-building and character development: a young man wakes up with no memory in a community of boys; trapped in a maze infested with horrifying creatures, none of them knows how they got there.

Joe Adler played Zart in the first Maze Runner film, one of the most reasonable and adorable members of the group, who unfortunately ends up taken by the creatures of the movie, presumably dying. The actor has since been part of several medical and investigative TV shows, before joining the cast of The Greatest Beer Run Ever.

Archie Reunaux is Will Collins in the Greatest Beer Run Ever, and the promising young actor is well-known for its key role in the show Shadow and Bone, where he plays Mal, the best friend and potentially love affair of the show’s main character, Alina, a young girl who discovers ancient abilities that could save her world from the darkness that falls upon it.

The sexual tension between Mal and Alina is something that fans love to see and the way they’re so inseparable kind of gives Mal certain protagonist energy, with the two often representing two different extremes of the story.

The Fallout remains one of the most delicate and honest movies of the year so far. A powerful drama that features one horrific scene that changes everything, the film starts off as a conventional coming-of-age story until it gives way to grief, fear, and the setbacks of getting over a traumatic event.

Will Ropp plays one of the key supporting characters, Nick, the best friend of Vada, a young teenager and the protagonist, who goes through a sensitive journey of self-discovery in the wake of a school tragedy.

Jake Picking was part of the most successful movie of the year so far: the beloved Top Gun: Maverick, which managed to reach over $1 Billion at the Box Office. Months after its release, the legacy sequel is still the target of energetic discussions, representing a hopeful future for other original blockbusters.

Jake Picking plays Lt. Brigham “Harvard’ Lennox, an elite graduate of TOPGUN. He was one of the candidates for the film’s main operation but didn’t make it as a member of the mission. In The Greatest Beer Run Ever, he plays Rick Duggan.

Kyle Allen plays Bobby Pappas in The Greatest Beer Run Ever and the actor comes from an exciting spree of good TV shows and movies such as American Horror Story and West Side Story, where he played Balkan, one of the Jets.

The film, nominated for seven Oscars last year, recounts the story of the ’60s classic of the same name, this time directed by the legendary Steven Spielberg. The exuberant musical follows two youngsters from rival NYC gangs who engage in a forbidden love, with tensions rising after a tragic incident that will put their relationship and their destiny at risk.

The legend of feel-good movies had to be part of a feel-good movie like The Greatest Beer Run Ever. Bill Murray is one of the best when it comes to taking roles that mix comedy and drama, and he plays The Colonel in the film.

Still active in the film industry after decades of working in comedy movies, Murray continues his Wes Anderson spree with The French Dispatch, released last year, to the point a Wes Anderson movie feels incomplete without him. He plays Arthur Howitzer Jr., the head editor of the so-called French Dispatch, inspired by the real-life figure of Harold Ross, founder of The New Yorker.

Russel Crowe is a veteran actor and even has an Oscar win in the bag for his Gladiator role. Crowe plays one of the main characters of The Greatest Beer Run ever and is certainly in the center of Chickie’s decision to travel all the way to Vietnam, as well as a loyal companion.

Having previously been part of the DCEU, he recently joined the MCU as Zeus, one of the key characters in Thor‘s latest journey, responsible for expanding the lore of the Nordic god to other mythologies. The film offers a funny and easy-going take on the king of Mont Olympus.

Zac Efron plays John “Chickie” Donohue in The Greatest Beer Run Ever, the main character and a real-life person who set out to Vietnam back in the ’60s with the high-spirited mission of delivering American beer to several soldiers during the height of the war.

In contrast with the happy-go-lucky Chickie, Zac Efron played one of the cruelest and most popular serial killers of American history in Extremely Wicked, Shockingly Evil and Vile: Ted Bundy. While the movie wasn’t so well received by critics, his performance was praised as a competent, disturbing portrayal of the charming face that Bundy used to mask his violent impulses.

Next: 10 Best Horror Movies About Fatherhood