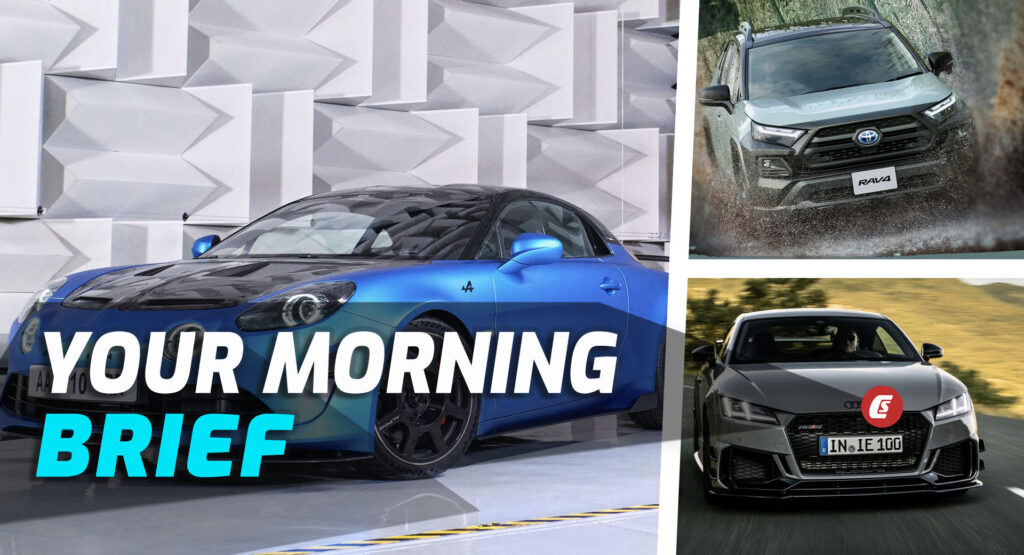 Good morning and welcome to our daily digest of automotive news from around the globe, starting with…

New research may put a dampener on combustion lovers who were hoping the advent of synthetic fuels would save us from a full-on EV invasion. A recent analysis published by Transport & Environment finds that e-fuel manufacturers in Europe will only be able to supply power to two percent of Europe’s vehicles by 2035. That’s just 5 million out of the 287 million projected to be on the road at that time.

The Alpine A110 R is here to teach us a thing or two about lightweight hardcore sportscars. It may feature the same engine as the A110 S, but accelerates to 62 mph (100 km/h) from rest in 3.9 seconds vs 4.2 seconds. That’s thanks to some drastic weight reduction involving a carbon hood, carbon wheels, carbon seats, and carbon rear window. All this means the R is 75 lbs (34 kg) lighter than the S. There’s also more aero, a new exhaust system, and a stiffer suspension.

The Audi TT RS Coupe Iconic Edition is the coupe’s swansong and will be limited to just 100 units. It features a pronounced front splitter, canards, blades in the front air intake, a fixed carbon fiber rear wing, and a revised rear diffuser. Inside, you get fine Nappa leather and Alcantara-trimmed RS sports seats with “Iconic Edition” embroidered into the seats. Power from the 2.5-liter turbocharged five-cylinder remains the same as the TT RS, with 394 hp and 354 lb-ft (480 Nm) of torque.

A Multi-brand dealership in Florida is suing Porsche for 300 million as it attempts to coerce the representatives into building a standalone forecourt to sell the German automaker’s products. The dealership, known as The Collection, alleges that Porsche asked it to build an exclusive location, and when they refused, Porsche withheld all pool-car allocations.

It wasn’t that long ago when black bumpers were a popular feature on low-rung and base model cars, with body-colored trim reserved for the elite. Now, thanks to the Japanese Toyota RAV4 Off-Road Package II, black bumpers have made a brief comeback and look rather cool in the process. Of course, while the unpainted bumpers of yesteryear were done for cost considerations, the “Gori Gori Black” of the RAV4 is actually more expensive, as the texture makes the parts more durable to scratches. Other off-road-focused features include grippy A/T tires by Falken (225/60R18), skid plates, and a 10 mm (0.4 inches) suspension lift.

Honda Continues To Tease 2023 Pilot TrailSport, Will Compete In The Rebelle Rally

Honda is entering an early production model of their 2023 Pilot TrailSport in the 2022 Rebelle Rally, an eight-day completion that will give the new SUV a baptism of fire before it has been fully revealed. Honda has confirmed that the Pilot TrailSport will feature a lift, an enhanced all-wheel drive system, and all-terrain tires. There will also be steel skid plates, front and rear recovery points, and a full-size spare tire.

Sixt Will Buy 100,000 Electric Cars From China’s BYD For Its European Rental Fleet

Sixt is committing to EVs in Europe by signing a deal to purchase 100,000 vehicles from BYD — a Chinese automaker that claims to be the world’s largest manufacturer of New Energy Vehicles. This is the first time a car rental company is offering BYD vehicles in Europe, starting from its customers in Germany, France, the Netherlands, and the UK.

What Else Is Making The News

Apple Forced To Switch To USB-C iPhone Chargers From 2024

The EU has voted to introduce a standardized port for mobile phones, tablets, and cameras by 2024, a move that is seen by many as targeting Apple’s reluctance to switch away from the Lightning Port on its iPhones. However, they won’t be the only once’s forced to change, reports The Guardian, with e-readers and earbuds also being included in the ruling.

Minecraft YouTuber and gamer known as Dream has revealed his face to millions of followers. The streamer had previously only been heard in voiceovers and used a smiley face mask to disguise his face. But Dream, real name Clay, decided to do the reveal in order to assist his friend in moving from Germany and to “just get out in the world.”