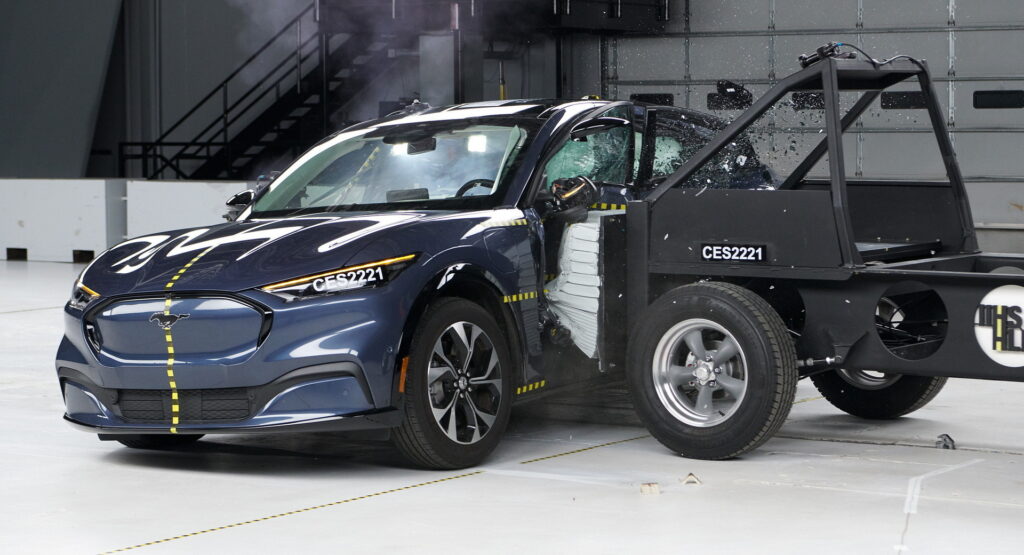 Ford did enough to prepare its electric crossover, the 2022 Mustang Mach-E, for a T-bone crash on America’s roads. That’s the conclusion of new crash testing from the Insurance Institute for Highway Safety (IIHS).

Under the new test, which imparts 82 percent more energy into a test vehicle than the old one, the Mustang Mach-E was able to hold onto its “Good” rating, the highest tier possible in the side impact evaluation.

The electric crossover did a good job protecting the heads of both front and rear seat passengers, earning it a “Good” result in those tests. Measurements taken from the dummies in most body regions, meanwhile, showed a low risk of injury, with only the driver’s torso showing a somewhat elevated risk.

Read Also: Only One Mid-Size Car Got A Good Score In New IIHS T-Bone Test Simulating Crash With SUV

It wasn’t all good news for the Mustang Mach-E, though. In terms of structural performance, it was docked points because the left rear door partially opened during the crash. That means that the IIHS has downgraded the crossover from a “Good” rating to an “Acceptable” rating in that subcategory of testing.

The safety organization announced about a year ago that it would be introducing new, stricter side impact crash testing to better reflect the vehicles on America’s roads, which are heavier and taller than the vehicles when the test was initially conceived. That has led to more severe crashes that kill more people.

The testing has proven to be challenging, with just one out of the 20 small SUVs tested last year by the organization earning a “Good” rating under the new regimen. Moving forward, though, that rating will be necessary for cars to earn a “Top Safety Pick+,” the IIHS’s highest accolade.