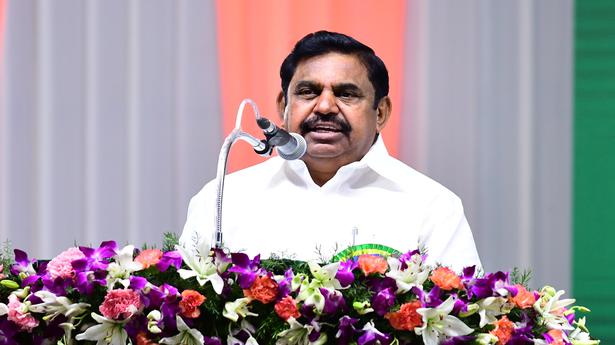 AIADMK interim general secretary Edappadi K. Palaniswami on Wednesday contended that the DMK government had failed to introduce any new major project and was only inaugurating projects initiated during the erstwhile AIADMK government.

Addressing journalists after meeting party cadre at his residence in Salem, he said the AIADMK government had announced 11 government medical colleges and a law college and the DMK had only inaugurated it. “They (DMK) are only inaugurating the completed projects that were brought during the AIADMK regime,” he stated. ‘

Further, tender was floated 11 times for 133 works in Coimbatore. But, there were no bidders to do the work. “They are reportedly demanding more commission,” Mr. Palaniswami alleged and added that various projects were stalled now.

Pointing out that the DMK failed to fulfill [some of] its election promises, he said 50% hike in electricity tariff and 100% hike in property tax, had affected the people.

When asked whether the Supreme Court had stayed the conduct of election to the post of general secretary of the AIADMK, Mr. Palaniswami clarified he had informed the court that no announcements were made regarding the election. “The court directed us not to conduct the general body meeting,” he added.