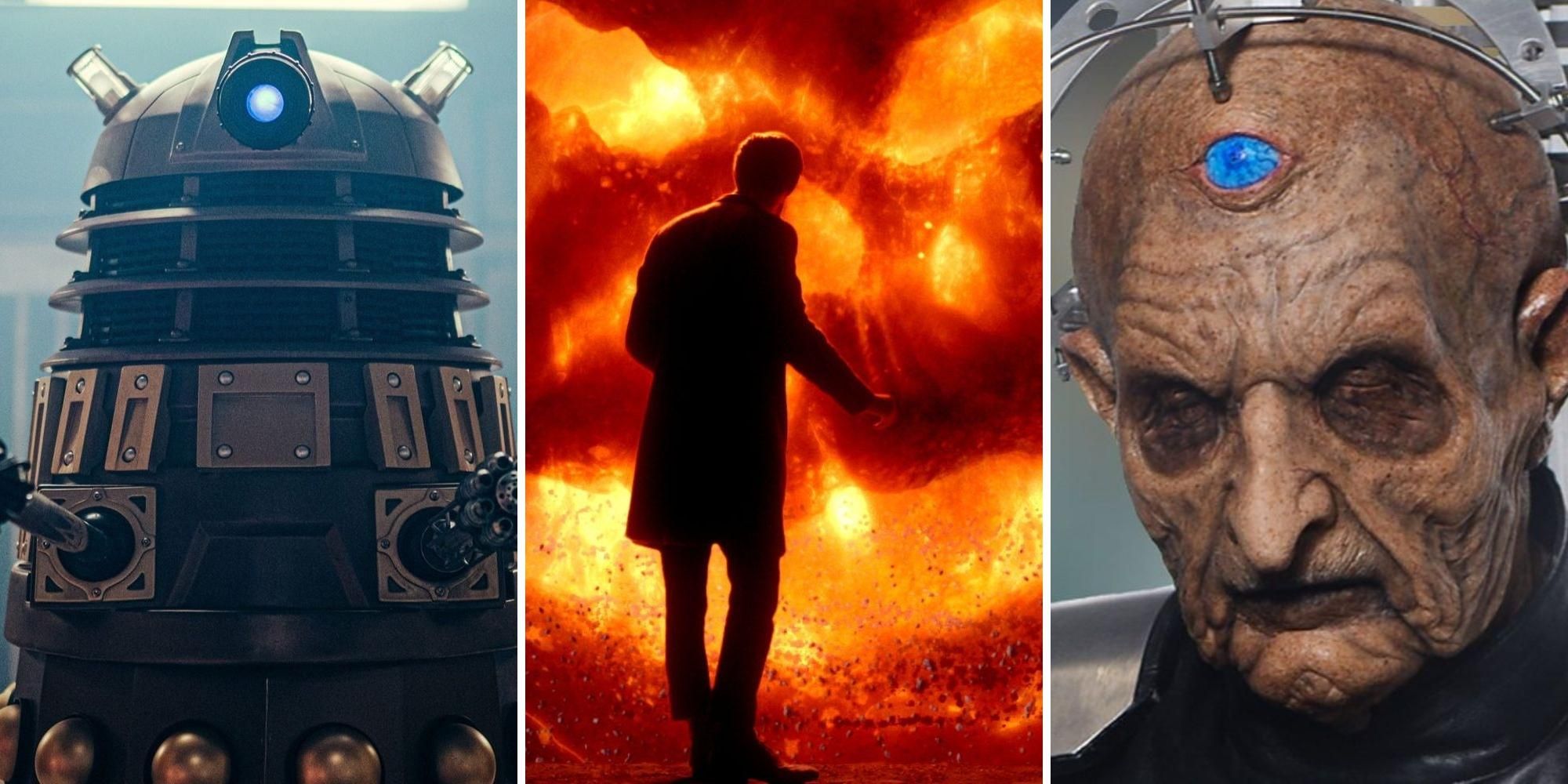 Some of the most iconic monsters and aliens in science fiction have appeared on Doctor Who during its 60-year run on television. With a range of forms and abilities, the showrunners have always encouraged the audience’s imagination, with foes like the timeline-warping Time Beetle to the omnicidal Daleks.

RELATED: Here Are 6 Ways to Get Started on Classic ‘Doctor Who’

Nevertheless, not every monster and alien on the show is powerful and striking. Initially appearing to be a dangerous menace, some later disclose their absurd flaws, which even causes the show’s most ardent followers to chuckle.

A criminal family from the planet Raxacoricofallapatorius is known as the Slitheen, first introduced in the series 1 episode “Aliens of London,” in which they infiltrated 10 Downing Street. They are large green aliens that pose as humans and scour planets for everything they can use to make money by selling.

The Slitheen, made of calcium, have one major weakness: vinegar, or acetic acid, as the Doctor more eloquently phrased it. If they are splashed with vinegar, they will violently explode into lumps of green gore.

The Zygons were a species of metamorphic humanoids from the planet Zygor, though they frequently attempted to leave it. Zygons’ crinkled design is among the most imaginative in Doctor Who, and their eerie, whispering sounds are fascinating, given the organic components they have incorporated into their technology.

Nevertheless, fans may be surprised to hear that an old grandfather clock could have defeated the evil shape-shifters of the show, despite the Zygons’ evolution as an alien foe. They were readily hypnotized by the pendulum of a clock, as stated in a 1997 video game, Destiny of the Doctors. Zygons also exhibited a strong aversion to fire, but at least that’s a bit more understandable than some antique.

The Krillitanes were a race that could adopt physical traits from other races they had subdued, and they would “cherry-pick” the best traits from those they had wiped off. First appeared in series 2, episode 3, “School Reunion,” the Krillitanes took the shape of bat-like forms with long necks.

The Krillitane have a lot working in their favor, but one of its most perplexing traits is its susceptibility to Krillitane Oil. According to extended media like the 2009 novel, The Krillitane Storm, it describes how The Krillitane’s continued abuse and ongoing physiological changes have resulted in their frailty.

The parasitic, sentient astronomical object known as Akhaten—also known as the Old God or Grandfather—consumed the souls of the Sun-singers of Akhet. who are introduced in series 7, episode 7, “The Ring of Akhaten.” The inhabitants of the nearby worlds regarded him as a powerful and terrifying deity.

However, the revelation that the Old God of Akhaten is readily defeated by a specific leaf belonging to a seemingly normal girl, Clara Oswald (Jenna Coleman), is a surprise for the fans. Although the theory behind it, in that the leaf includes an endless number of potential causalities, is entirely plausible: it’s still underwhelming that a leaf would subdue a god.

RELATED: ‘Doctor Who’: Every Regeneration Story, Ranked from Worst to Best

The Kaveetch founded the military and aggressive humanoid race known as Sontarans on the planet Sontar, which is initially introduced in season 11, serial 1, “The Time Warrior.” The Sontarans were humanoids with short, stocky bodies and big, bulbous skulls as often compared to “huge potatoes with ray guns.”

The ventilation probe on the back of the Sontarans’ necks has always been their primary vulnerability. They would perish if a sharp object were inserted into the vent. Even though the Sontarans are a race of genetically altered beings, this weakness has always been contentious despite its in-universe justification.

The creator of the Daleks is, without a doubt, one of the most intelligent characters in Doctor Who. Originally the leader of the Kaled Scientific Elite on the planet Skaro, Davros is frequently referred to by his creations as the Creator, a.k.a. the Dark Lord of Skaro. In addition to giving rise to the Daleks, Davros developed a wide range of weapons during the conflict between the Thals and the Kaleds and, despite having a crippled body, prevented death for hundreds of years.

However, given his enormous intellect, the existence of an on/off switch on Davros’s life support chair is still perplexing. Hence, in the classic story “Genesis of the Daleks,” the Doctor came dangerously close to using this grave design error to stop the genesis of the Daleks.

Even though the Daleks are some of Doctor Who’s most lethal adversaries, the original series has a history of mistreating them. The Daleks were a warrior species composed of genetically altered mutants with the primary DNA type 467-989 and were first introduced to Doctor Who fans in season 1, serial 2, “The Daleks.”

The Daleks acknowledged the Doctor as their greatest foe on numerous occasions. Nonetheless, earlier models of Daleks were confused by staircases due to their gliding pace, which is surprising considering how adept they were at conquering planets.

RELATED: ‘Doctor Who’: 12 Historical Figures the Doctor Has Met

The androids known as Movellans were introduced in “Destiny of the Daleks” and fought the Dalek Empire. The Movellan all wore white, form-fitting uniforms, appeared to be humans of various races and genders and had dreadlock-style braids. Notably, they are also more physically capable than humans.

However, the Movellans’ primary weakness is their flawed design with each android’s external power pack, which was kept on their belts, was simple to remove, and rendered the android utterly inoperable. The circuitry of the power pack can be altered after removal so that the android will follow instructions from another being.

The Abzorbaloff took on Victor Kennedy’s persona and infiltrated L.I.N.D.A to kill the Doctor. He was the primary antagonist in one of Doctor Who‘s most divisive episodes, “Love & Monsters.” He only needed to touch his victims to absorb their bodies, memories, and consciousnesses.

Despite his advantages, the Doctor defeated him by simply breaking his cane, which destroyed his capacity to maintain control over the people he assimilated. It goes without saying that it gives the Abzorbaloff an extremely feeble appearance and makes viewers wonder how effective his inborn absorption powers are.

The Cybermen were a race of cybernetically enhanced humanoids originating on Earth’s twin planet Mondas that was first seen in season 4, serial 2, “The Tenth Planet.” They became ruthlessly analytical and calculating, with emotion almost completely erased from their minds, as they inserted more and more artificial components into their bodies as a means of self-preservation. The Daleks and Cybermen are also at odds with one another.

Despite the Cybermen’s great physical prowess, they are vulnerable to gold due to their non-corrosive features as long as the metal gets inside their lungs or breathing system. Given that they have walked across the moon, a satellite with no oxygen, it is an absurd weakness.

KEEP READING: From James Corden to Maisie Willaims: 16 Iconic Celebrities on ‘Doctor Who’ You May Forget Starred on the Show