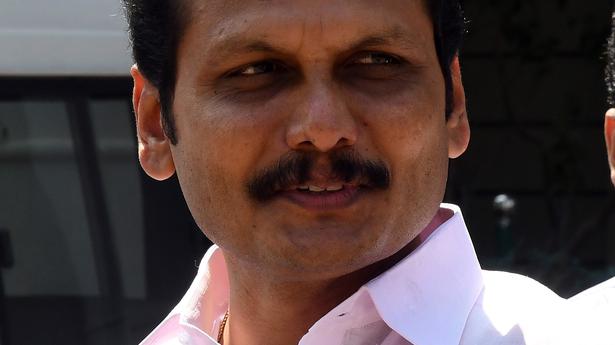 Corruption allegations against V. Senthilbalaji are a problem for M.K. Stalin

Corruption allegations against V. Senthilbalaji are a problem for M.K. Stalin

Last week, the Chennai Central Crime Branch police informed the Madras High Court that it had collected sufficient evidence to prove Mr. Senthilbalaji’s involvement in a case of “cash for jobs” in the Metropolitan Transport Corporation, which was registered in 2017.

The alleged corruption took place when he was the Transport Minister between 2011 and 2015 in the Jayalalithaa Cabinet. Investigators said they had examined 21 witnesses in one of the three cases booked on similar charges and collected materials indicating the Minister’s culpability.

Curiously, a year ago, the High Court had quashed the case following a “compromise” between the “bribe-giver” and the “bribe-taker”. However, last month the Supreme Court held that this was erroneous and ordered restoration of the criminal complaint. The top court shied away from constituting a Special Investigation Team (SIT) to probe the charges saying “we do hope based on the observations made, the State itself may do the needful”.

However, questions are being raised whether the police would be able to act in a free and fair manner against the powerful Minister.

A resourceful party-hopper, Mr. Senthilbalaji’s continued rise in politics and proximity to the top leadership in multiple parties has left many politicians surprised and jealous. Born as Senthil Kumar, sporting a trademark vermilion on his forehead, he had joined Vaiko’s Marumalarchi Dravida Munnetra Kazhagam (MDMK) as a student in the 1990s before embracing the Dravida Munnetra Kazhagam (DMK).

By the turn of the millennium, he had donned the AIADMK shawl. He shot to prominence in 2006 when he entered the Assembly from Karur. In 2011, Jayalalithaa inducted him in her Cabinet. At one point, his proximity to her close circles was such that his name too did the rounds as a possible interim successor to Jayalalithaa after she was unseated as Chief Minister and jailed in a corruption case in 2014.

However, things hit a rough patch the following year and she stripped him of ministership. Yet in 2016 she fielded him in Aravakurichi constituency but did not make him a Minister again.

In Karur district, though, he emerged as a strong leader. The DMK at that time detested his clout. In fact, Mr. Stalin, during a campaign, said, “There was a minister in this district, Senthilbalaji… He has Karur under his control in terms of looting, corruption, and taking bribes. Charges of abduction and land grabbing against him are in court. Is it just one or two, there are so many charges.”

After Jayalalithaa’s death, he was among the 18 AIADMK legislators to be disqualified for backing rebel leader T.T.V. Dhinakaran. Again it was Mr. Senthilbalaji who was among those who mobilised resources, to conduct a mega meeting for the launch of Mr. Dhinakaran’s Amma Makkal Munnettra Kazhagam (AMMK).

In a shrewd move, he joined the DMK in 2018, quickly gaining Mr. Stalin’s confidence, who made him the party in-charge for Karur district. The next year he was the lone disqualified legislator to enter the Assembly again on a DMK ticket.

When Mr. Stalin became the Chief Minister in 2021, he rewarded Mr. Senthilbalaji with the portfolios of electricity, prohibition and excise.

Mr. Senthilbalaji’s perceived proximity to Mr. Stalin’s close family members has made some DMK veterans wary of him. Incidentally, Bharatiya Janata Party (BJP) State president K. Annamalai, also from Karur, is a strong critic of the Minister, and has claimed that some DMK leaders themselves had urged him to intensify his attack on Mr. Senthilbalaji.

For Mr. Stalin, it is not easy to ignore the political resourcefulness of Mr. Senthilbalaji, who had helped the DMK consolidate not just in Karur but also sweep the urban local body polls in Coimbatore, a traditional AIADMK stronghold.

Mr. Stalin now has to choose between retaining a political asset and political integrity.