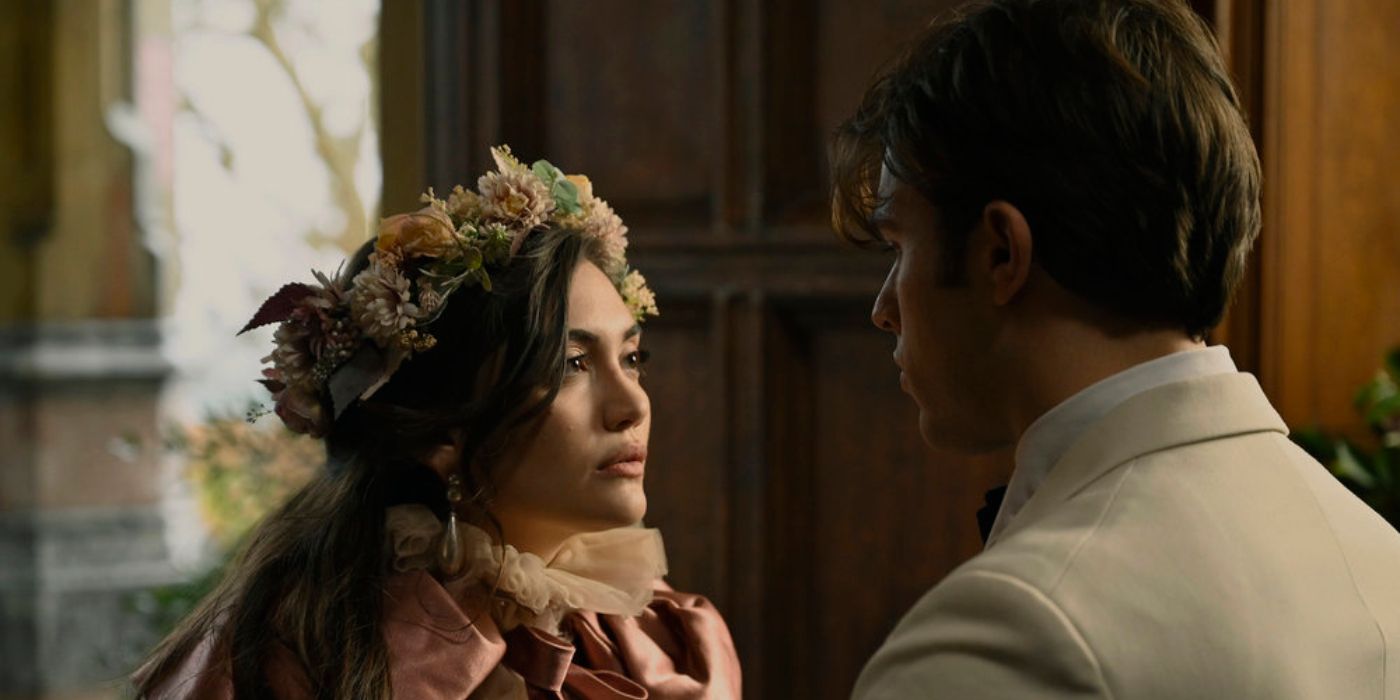 Vampire Academy‘s “Molnjia” continues with the more episodic feel that the past few weeks have had, but in doing so, it really shows one of the pitfalls of these kinds of dramas. There were four parallel stories running this episode with minimal story and character development (but two kisses!), so for the purposes of this recap, we’re just going to run through the chronology of each story.

The first storyline, and the most emotionally central to the episode, is Rose’s. Episode 6 begins with Rose (Sisi Stringer) beginning the ceremony to receive a tattoo for her first Strigoi kill (Mikhail from the episode prior). As the needle approaches her she thinks of her friendship with Mikhail (Max Parker) and feels it’s not right to get a tattoo for having killed him, so she runs away. While working security at a party, Rose learns that due to the recent motion to remove Guardians from non-royal Moroi to increase protection of the royals, non-royals in the country are being forcibly relocated in an attempt to ensure protection of some sort for them. One of the places where said relocation is occurring is the village in which Mikhail grew up, so Rose demands to be put on duty there.

Rose and Dimitri (Kieron Moore) encounter Mikhail’s family – his sister Sasha (Jazzy De Lisser) and his father (William Chubb). Sasha, also a Guardian, is betraying her duties in order to stay with her father and refusing to allow him to be relocated. We find out that she is doing this because he is going to die soon anyway, and they would rather he pass in his family home. We also learn that Sasha and Mikhail were actually raised by their Moroi father after their dhampir mother passed; this is extremely unusual but seemingly a very noble choice for their father to have made.

Sasha appears frustrated with the council, blaming them for concocting the situation in which Mikhail died and for attempting to force their father to relocate. Mikhail’s father, on the other hand, carries himself much more calmly but ultimately wishes to die in his home. He also speaks with Rose alone to assure her that she did the right thing in killing Mikhail once he turned Strigoi and encourages her that the ceremonial tattoo commemorating her killing of him is a way to honor what he would’ve wanted, not disrespecting his death. Rose and Dimitri, after finding out Mikhail’s father will ultimately die before the end of the night, decide to forgo their mission in order to defend the house for the night, so he can pass peacefully in his sleep. Later on, Dimitri is the one who gives Rose her Strigoi tattoo, which leads to the two having their first kiss.

The next major story arc follows Lissa (Daniela Nieves) as she tries to find a way to meet Adrian Ivashkov (Leo Woodall), a royal Moroi in possession of extremely rare and old artifacts which Lissa believes may be able to teach her more about her Spirit element. This begins with her attending some sort of ball on the royal tour with her new fiancé Jesse Zeklos (Joseph Ollman). When she realizes that Jesse is going to be unable to get her a meeting with Adrian, she instead goes to speak with Jesse’s father to secure what she needs.

Ultimately, she gets her hands on an invitation to Adrian’s private party, where she attempts to use her power to compel him to let her see his art collection. The compulsion doesn’t seem to actually work, but it’s unclear if Adrian chooses to go along with her request for his own reasons. We don’t really learn anything new or interesting until after they’re done looking at the collection and Lissa falls asleep at the party, at which point Adrian enters her dream to tell her that he knows what she was looking for and that even though she may not have found it in his art he may still be able to help her. Adrian reveals that he is also a Spirit user, this is how he was able to “dream walk” and offers to get Lissa some answers if she’s willing to go on an adventure with him.

A somewhat more minor side plot this week follows both Viktor (J. August Richards) and Sonya (Jonetta Kaiser) as they begin their rounds of networking for the upcoming elections. As this happens, they get caught in a public political smear game with Tatiana (Anita-Joy Uwajeh) who’s been expertly playing some sort of double-sided political game that we don’t yet fully understand the endgame of. Tatiana begins to smear Viktor as someone who’s forsaken their royal duties as well as Mikhail (Sonya’s now-dead boyfriend) as an incompetent guardian. Sonya loses control of herself and violently attempts to attack Tatiana before she is pulled away from her, thus humiliating and hurting Viktor’s campaign.

The second smaller B-plot follows Mia (Mia McKenna-Bruce) as she is first punished by having her hands branded for using magic both as a weapon (which is supposedly blasphemous and against a royal. This occurred in the previous episode when she used her magic on Jesse while he was harassing Meredith (Rhian Blundell), a Guardian who is also starting to become her love interest. After the punishment is dealt out, Mia decides to seek out Christian (Andre Dae Kim) so he can help her learn to control her magic as she feels she cannot properly do so. At one point in the episode, Mia also goes to visit Meredith, who is recovering from her injuries, and the two also share their first kiss.

Ultimately, the episode was not boring, but a little empty. As I mentioned earlier, this episode is kind of a perfect example of one of the most common problems with teen dramas – the filler episodes, which play themselves as if they are part of the larger plot of the series, but that ultimately make no real progress. Fans of The Vampire Diaries may be very familiar with this issue as the show suffered from it on occasion; often, the middle 10+ episode of a season would have maybe five minutes of actual development per episode and then 40 minutes of confused rambling. This is the kind of thing that if it happens once in a while can be a nice change of pace for a show, but if it becomes that characteristic of the average episode it can make it feel like you’re wading through quicksand anytime you watch it, being constantly pulled back from actually enjoying the series. So far these have been the first signs of this as an issue on Vampire Academy, so I’m hoping that it doesn’t become chronic.