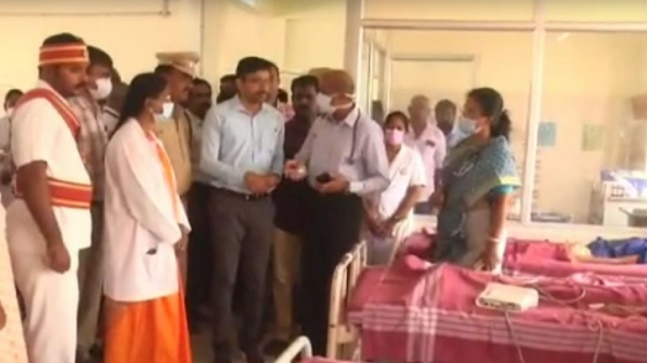 Three children died due to food poisoning at a childcare home in Tamil Nadu’s Tiruppur. Eleven others have been admitted to the hospital, out of which three are in the ICU of a government hospital. Officials are conducting an investigation into the issue.

Tiruppur collecter Vineeth enquiring about the condition of the children with doctors at the government hospital.

Three children died due to suspected food poisoning at a childcare home in Tamil Nadu’s Tiruppur on Wednesday night. Eleven children have been admitted to the government hospital for treatment, out of which three are in the Intensive Care Unit (ICU).

Children living in the Vivekananda Sevalayam, a childcare home, were taken to a private hospital after they began to vomit. When their condition began to get worse, they were moved to Tiruppur government hospital.

According to sources, the children had rasam rice on Wednesday night. A few hours later, 14 children began to vomit and a few fainted. They were just taken to a private hospital and then later moved to the government hospital in the area where three of them died.

Tiruppur collecter Vineeth stated that Vivekananda Sevalayam was a recognised home and officials are conducting investigations into the matter. “Three are in ICU. Police, Child Protection Unit and Revenue officials have initiated an investigation”, he said.