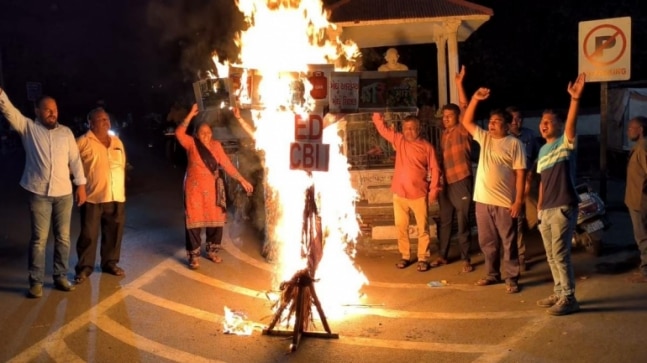 To protest against the rising prices and corruption, the Kutch district Congress burnt the effigy of ED, CBI and inflation in Bhuj, Gujarat, on Wednesday.

When the entire country celebrated Dussehra by burning the effigies of Ravana, to mark the victory of good over evil, the Kutch district Congress burnt the effigy of the Enforcement Directorate (ED), Central Bureau of Investigation (CBI) and inflation in Bhuj, Gujarat, on Wednesday.

Congress protested against the Bharatiya Janata Party (BJP) government on the banks of the Hamirsar pond of Bhuj. They burnt the effigy of ED, CBI and inflation instead of Ravana and raised slogans in protest.

With the assembly elections nearing in the state, Congress took on the BJP and raised issues like price rise, inflation, poor health facilities, expensive education and GST.

They also accused the BJP government of trying to suppress the voice of the opposition by using central probe agencies.

(With inputs from Kaushik Kanthecha)