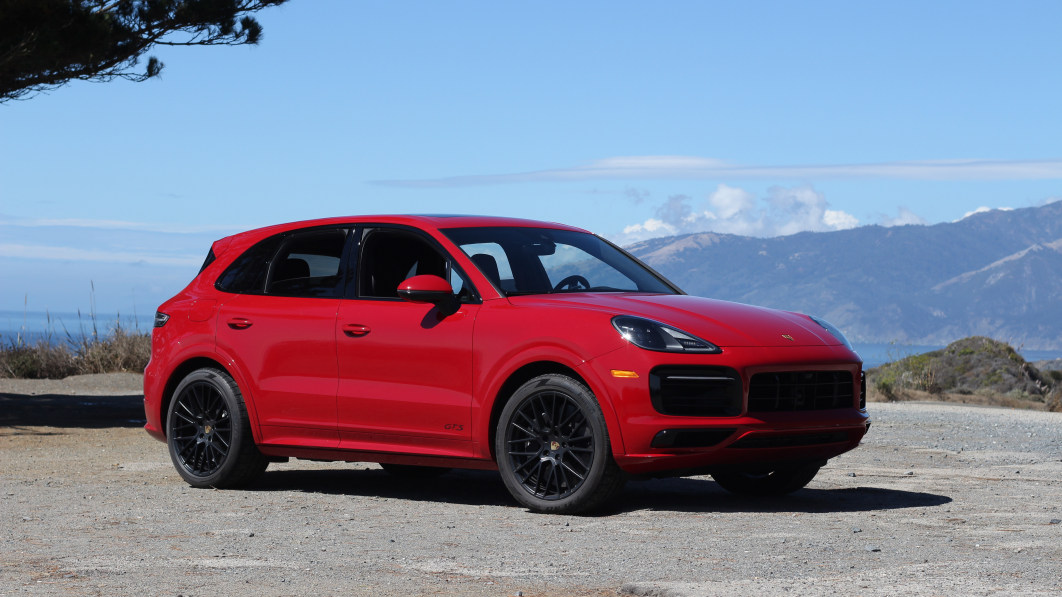 MALIBU, Calif. — I pull the upshift paddle near redline on this 2022 Porsche Cayenne GTS, and a ripping snarl bounces back off the cliff faces, sounding as if the transmission is actively lunching on itself. The 4.0-liter twin-turbo V8 blats out its menacing tune as the speedometer quickly climbs with little care for the steep mountain I’m winding my way up. A tight, blind corner is next, and my foot breathes a slight pressure onto the stiff brake pedal, causing the Cayenne to drop speed quickly with seemingly very little effort. A quick flick of the well-weighted steering wheel sends the Cayenne into the corner with the sensation of something far lighter and shorter. Inspiring loads of confidence in me, I drive my foot into the throttle through the corner, and the Cayenne springs forward with heaps of traction and torque to yank its way up the next uphill climb and never-ending series of left-right-left-right.

These are the canyon roads north of Malibu, and they’re one gorgeous way to test how nimble and competent Porsche’s biggest SUV can be. The verdict on how it performs, as it typically tends to be with Porsche products, is better than any of its competitors can achieve. This first test is only the beginning of a days long test to come, though, as after I stop playing in the canyons, I’m pointing the nose north for a long trip up Highway 1 from Los Angeles to San Francisco.

Before then, the hooning continues. While the Cayenne Turbo GT may be the highest performing version of Porsche’s big SUV now, the GTS is the second-most-serious variant money can buy. For the Cayenne’s current generation, Porsche put a V8 back under the GTS’ hood (the previous one had a V6), ensuring that the enthusiasts who opt for one would be treated to the best soundtrack possible. It comes standard with Porsche’s Sport Exhaust, but it’s been uniquely tuned for the GTS model to be even more emotive. Power is more than sufficient at 453 horses and 457 pound-feet of torque. That’s plenty to never make you want for more, but not too much that it’s unusable on fun roads — Porsche claims a 0-60 mph sprint of 4.2 seconds when equipped with the Sport Chrono Package, as this one is.

The options sheet on this Carmine Red tester lists every possible performance extra you can get, which isn’t long considering Porsche includes a number of extras as standard with the GTS, like PASM (Porsche Active Suspension Management), Porsche Torque Vectoring Plus, a 30-millimeter lower ride height versus an S and big 21-inch RS Spyder wheels. Of course, this Cayenne GTS is also equipped with Porsche’s Ceramic Composite brakes, rear-axle steering and the electromechanical roll stabilization system termed PDCC.

That lowered, roll-stabilized chassis stays flat when you’re scything through corners — the air suspension automatically lowers when you put it into Sport Plus mode. I can physically feel the rear-axle steering helping this big car pivot around tighter corners, and, my god, those brakes. I don’t find much joy in barreling down a canyon road downhill, but this Cayenne GTS has all the braking power to facilitate such an endeavor. The GTS is heavy at 4,954 pounds, but these massive brakes don’t even begin to sweat after constant beating.

The beauty of having a Cayenne up here in the mountains is that it’s just as happy to pull off onto a rocky outcropping to take in the ocean views as it is to keep up with sports cars when you want to. Even with a 911’s nose lift, there’s no way it would’ve facilitated the sort of inclines or drop-offs I subjected the Cayenne to.

Once the fun is over, I get a chance to see how the Cayenne does as a mile-muncher on the highway. While fitted with adaptive cruise control, this GTS lacked any kind of lane-following tech, for Porsche makes most of its driver assistance features optional. If you want a feature, you can likely afford it, though, as the lowest bar for entry on a Cayenne GTS is $110,350 — this particular example totals $143,320. Luckily for me, the sort of driving ahead is largely winding ocean-viewing roads that I’d rather be in full control of the steering wheel for anyway.

Dialed back to “Normal,” the Cayenne’s ride becomes compliant and forgiving, almost forgetting that it’s a serious GTS model. I can’t say the same for the 911 GTS, which never seems to settle down from being a few steps away from a GT3 in ride quality. I’ll thank the Cayenne’s air suspension for this breadth of operation and suitability in multiple environments. No, you don’t feel every crack in the road through the seat of your pants in the Cayenne as you do in a 911 GT3, but the flexibility is just as it should be for an everyday SUV. The racket of an exhaust is toned down in Normal, but even so, the GTS always rumbles about like a performance V8 should. It’s almost as if Porsche wants to make sure you remember you chose the GTS over an S, and it does so with sound. The only time it really shuts up is when you’re cruising along at a steady rate on the highway with only whispers of wind to disturb the luxurious peace inside the vehicle.

This Cayenne’s interior is well-suited to both canyon runs and long-haul drives. Those signature grab handles in both the front and rear allows passengers an easy place to brace themselves when you’re driving enthusiastically, and the GTS’ Sport Seats have all the bolstering you need to stay planted — Porsche’s Race-Tex goes in the seat centers on the GTS and is exceptionally grippy. When the time came to sprawl and relax, it was just as easy to loosen the adjustable bolsters up and enjoy the highly customizable 18-way adjustable lounge chairs. Between a wide range of steering wheel and seat adjustment, if you can’t find a comfortable position in these buckets, it must be an anomaly.

A couple hundred miles of boring driving will eventually dump you out onto the good part of California’s famed Highway 1. If you’re in it for the views, there’s very little road in the U.S. that can top it. Don’t go for driving fun, however, as those enjoying the views will always pack the roads. The Cayenne fit in with the scenery perfectly. Its red paint gleams in the sunlight, and all the GTS-specific black-painted accents give it the aggressive contrast look we’d expect from any Porsche GTS product.

Visibility out of the car is vital to any Pacific Coast Highway trip, and Porsche knows this quality well — the 911 is perhaps the easiest to see out of sports car in the world. The Cayenne isn’t particularly special in its visibility versus other SUVs, but this is one time I was grateful to be in the traditional Cayenne and not the Cayenne Coupe.

Porsche tends to excel at making ergonomically excellent cars, too, and that’s just what you get with the infotainment system and mostly-digital instrument cluster. This Cayenne is rocking Porsche’s latest PCM software (that includes Android Auto finally!), and it was foolproof throughout the trip all while being easy to operate. Apple CarPlay loads up wirelessly right away, and you’re never far from smacking that “Sport Exhaust” button in the Vehicle menu. This system is simple, quick and doesn’t overwhelm with wild graphics or unnecessary frills. You’ll hit large swaths of road with no cell signal on Highway 1, and while I typically never need to rely on in-car navigation to get places these days, road trips like this one make me grateful for the continued existence of pre-programmed maps. The same goes for traveling high up in the canyons, which just isn’t a situation I ever encounter in the usual course of testing cars from home base in Michigan.

Eventually, the scenic part of Highway 1 fades away, and it’s time for the last boring stretch up to San Francisco. Despite the route seeming boring on the GPS, this GTS helps make the mundane a good bit more exciting with loud rips onto the highway from entrance ramps, made all that more accessible by the useful “Sport Response” button. More performance cars could benefit from this handy button that instantly plops the car into its most aggressive settings for set periods of time. Sometimes, that’s exactly what you’re looking for, whether it’s to pass a slow driver or to quickly get up to speed on the freeway.

The city of San Francisco once again makes me happy to be piloting an SUV with its massive grade changes and breakover angles everywhere — a number of years previous to this trip, I scraped my lowered Integra’s exhaust all over the city on these extreme roads. This time, no problem.

Spending over a week in this Cayenne GTS drives home the feeling that there really isn’t a more satisfying SUV that’ll do it all on sale today for driving enthusiasts. Sure, the AMG and M options may be cheaper and have more tech for less money, but none of the competition is as hilariously fun and engaging on a great road. The argument for the Cayenne GTS is similar to that for a 911 and anything else in Porsche’s lineup. There are a ton of other options that are truly exceptional, but if you simply want the best driving experience possible in an SUV, you’re not going to do better than a Cayenne. It’s essentially what’s been said for the last 20 years — yes, we’re 20 years on from the Cayenne’s introduction this year — and it’s no less true today than it’s ever been.