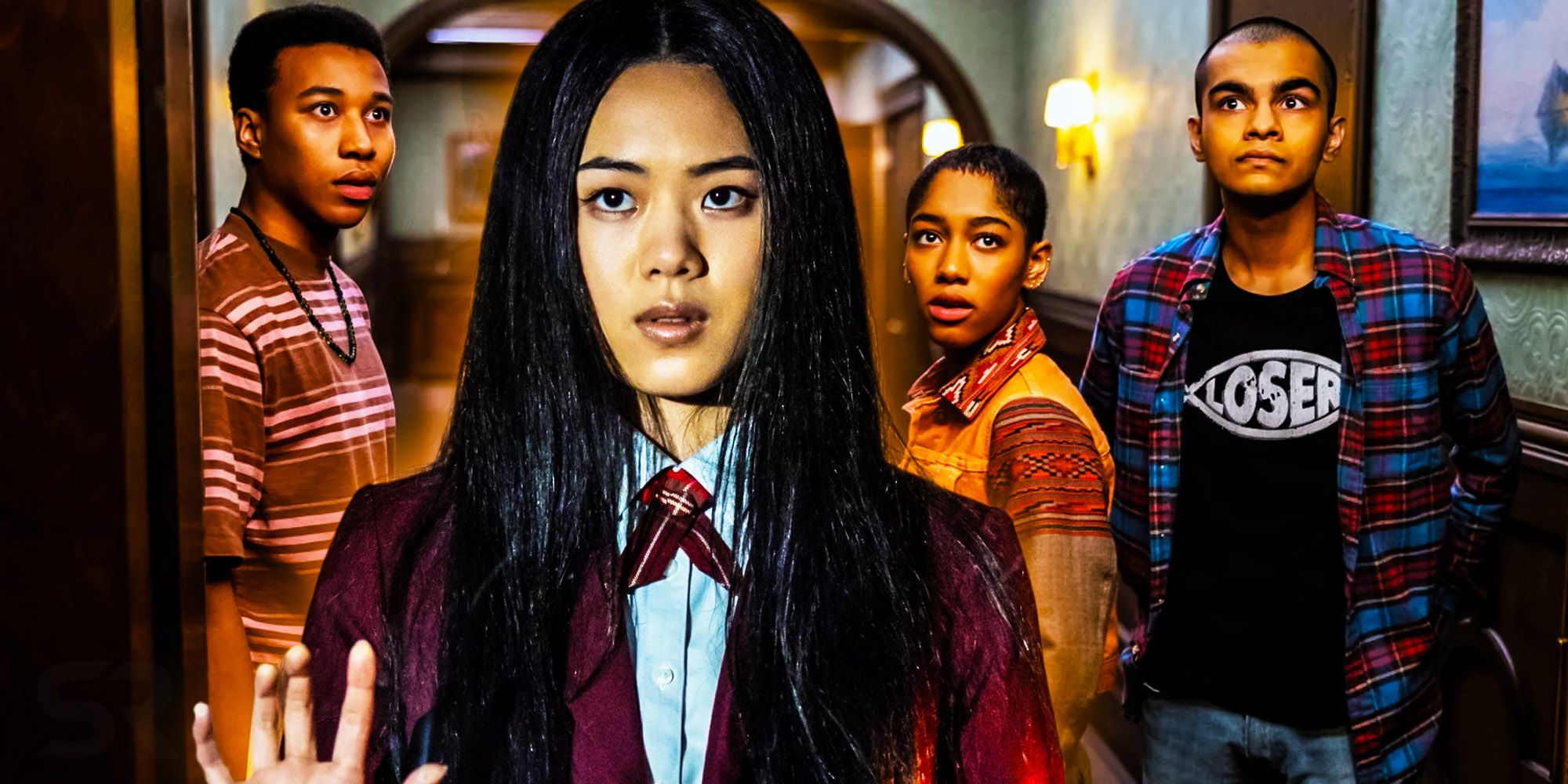 Netflix’s The Midnight Club has a cast of characters that is immediately endearing, held down by a talented lineup of young actors. A live-action adaptation of Christopher Pike’s beloved YA horror novel, The Midnight Club tells the story of a group of teenagers, each facing down mortality in a hospice named Brightcliffe. Each night, a group of Brightcliffe’s residents gather together at midnight to tell stories, and make a promise to one another: whoever dies first has to find a way to contact the others from the afterlife and let them know what it’s like.

Like many of Mike Flanagan’s Netflix series, The Midnight Club grapples with a number of complex themes. Terminal illness, mortality, existentialism, and what happens after one dies are all threads that help weave the tapestry of the show. Dealing with so many heavy topics without making it feel like an utterly depressing slog requires a cast with a deft touch and a lot of skill. Luckily, the show has one. Here’s the cast of The Midnight Club, explained.

Related: What The Hourglass Symbol Really Means In The Midnight Club

Iman Benson stars as Ilonka, the main protagonist in Netflix’s October 2022 show. Ilonka is a smart, driven teen with a scholarship to an Ivy League school. But when thyroid cancer derails her plans, Ilonka finds herself as Brightcliffe and part of the Midnight Club. She’s determined to survive, and she soon learns that there is more to Brightcliffe than anyone realizes. Audiences may know Benson from her various TV roles: Reagan on Alexa & Katie, Drea on #BlackAF, and Tia Russell on Uncle Buck. She’ll be seen next in the upcoming War of the Worlds remake.

Igby Rigney plays Kevin, another resident of Brightcliffe and the first person Ilonka meets. Their quick connection, and disarmingly charming way of talking about his leukemia, make them fast friends in The Midnight Club. Viewers will likely recognize Rigney from his previous Mike Flanagan project Midnight Mass, where he played Warren Flynn, or perhaps from F9: The Fast Saga, where he played a young Jesse. He’ll soon be seen in his third Flanagan series, The Fall of the House of Usher, an adaptation of Edgar Allan Poe’s short story.

Anya, played by Ruth Codd, is Ilonka’s reluctant roommate at Brightcliffe in The Midnight Club. An amputee due to her bone cancer, Anya is all prickles – sharp-tongued, cynical, and reluctant to let anyone in. However, it’s all a wall to hide how much death she’s seen in her young life. The Midnight Club is the Irish actress’ first role, but, like Rigney, she’ll also soon be seen in The Fall of the House of Usher.

Spencer, played by William Chris Sumpter, is usually the bright-eyed life of the party. He ended up at Brightcliffe Hospice when his conservative family found out he was gay and kicked him out. As Netflix’s The Midnight Club is set in the ’90s, Spencer still carries a lot of fear as an HIV+ kid that he’ll accidentally infect someone else every time he gets even a minor cut. The Midnight Club is Sumpter’s first significant role. Previously, Sumpter appeared as young Jamie in an episode of Power, and as teen Theo in the movie NYC Dreams.

Aya Furukawa plays Natsuki, a patient at Brightcliff who is being treated for ovarian cancer. Thanks to trauma in her past, Natsuki has mental health challenges, which is possibly why the stories she tells are always horror. Before The Midnight Club, Furukawa was arguably best known for playing Janine Kishi in The Baby-Sitters Club. She’s also appeared as Sachiko in The Terror, and as a server in Brand New Cherry Flavor. Like others in the cast, her next project is The Fall of the House of Usher.

Sandra, played by Annarah Cymone, is a bit of an odd fit at Brightcliffe, despite her terminal lymphoma. Thanks to her ultra-religious upbringing, she can occasionally be an uptight scold and quite naive. However, she genuinely cares about the other patients, using her faith to keep her spirits and theirs from sinking too low. Previously, Cymone’s breakout role was in Mike Flanagan’s vampire-focused Midnight Mass.

Sauriyan Sapkota’s Amesh, who has glioblastoma, was the “new kid” of the group until Ilonka. He’s the class clown and the prankster of the group, as well as a huge gamer. Despite his jovial nature, just like the others in The Midnight Club, Amesh cares deeply for the other patients. The Midnight Club is his first acting role; The Fall of the House of Usher will be his second.

Cheri, played by Adia, is a mystery to the group. She clearly comes from wealth, but her fantastic stories about her parents and inconsistencies in her anecdotes make it hard to know when she’s telling the truth and when she’s making something up. It’s all an act to hide the fact her rich, busy parents dumped her in Brightcliffe as soon as she got her terminal diagnosis. Mike Flanagan’s The Midnight Club is, so far, Adia’s first and only acting role.

The iconic Heather Langenkamp features as Dr. Georgina Stanton, the compassionate but enigmatic doctor in charge of Brightcliffe. While she genuinely cares for her patients, it also seems she’s keeping secrets from them. Horror fans will, of course, know Langenkamp as final girl Nancy Thompson in the A Nightmare on Elm Street franchise. Others will know her from her roles in ’80s sitcoms Just the Ten of Us and Growing Pains, and later roles in American Horror Story and Star Trek into Darkness.

Zach Gilford as Mark – Zach Gilford plays Mark, a nurse practitioner at Brightcliffe. The residents usually roll their eyes when he’s around as he can be a bit of a nag, but he genuinely cares for his charges. Gilford has an extensive acting resume, best-known for playing Matt Saracen on Friday Night Lights. He’s also been in Off the Map, The Mob Doctor, L.A.’s Finest, and, of course, Midnight Mass, playing Riley Flynn. He’ll next be seen in The Fall of the House of Usher.

Matt Biedel as Tim Pawluk – Matt Biedel plays Tim, Ilonka’s foster father, in The Midnight Club. A struggling blue-collar worker, all Tim wants is what’s best for Ilonka. Biedel was previously seen as Sturge in Midnight Mass. Before that, he’s appeared in a number of TV shows including Narcos: Mexico, Altered Carbon, and The Umbrella Academy.

Samantha Sloyan as Shasta – Shasta, played by Samantha Sloyan, is a naturopathic healer who lives near Brightcliffe Hospice. A chance meeting in the woods sends Ilonka on her journey to get better. Like most on the list, Sloyan has appeared in a number of Flanagan productions, including The Haunting of Hill House, Midnight Mass, and, after The Midnight Club, The Fall of the House of Usher. Non-horror audiences will know her from her work on Grey’s Anatomy and Scandal.

Rahul Kohli as Vincent – Vincent, played by another Flanagan alumnus Rahul Kohli, is a fictional character made up in one of Amesh’s stories in The Midnight Club. Kohli has previously appeared in Midnight Mass and The Haunting of Bly Manor. He broke out playing Dr. Ravi Chakrabarti in iZombie, and has also had a role in Supergirl and voices Scarecrow in Harley Quinn. He’ll next join the others on this list appearing in The Fall of the House of Usher.