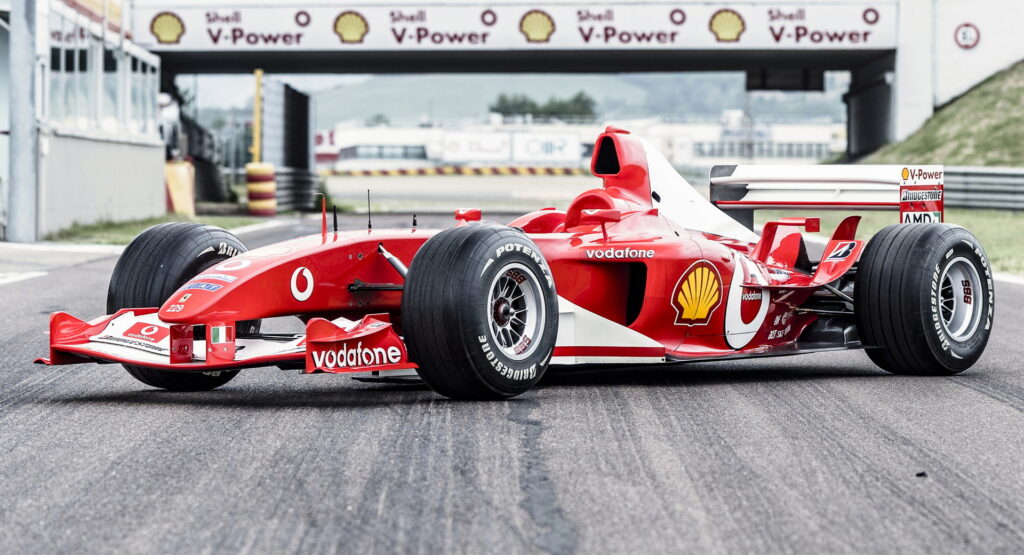 Michael Schumacher’s legend is cemented in the annals of F1 history, and now one important part of that history is up for sale as RM Sotheby’s is auctioning off a 2003 Ferrari F2003-GA.

Chassis number 229, this is the car that took the irrepressible German driver to the top step of the podium five times, onto the podium another two times, and, ultimately, earned him a world driver’s championship in the 2003 season.

Despite this particular Ferrari‘s ultimate success, its victories weren’t always so sure. Designed to use the fuel load to move the center of gravity towards the back of the car for qualifying (to prevent the front tires from overheating on hot laps), and forward for the race (in order to conserve the rear tires), the design was compromised by a last minute change in the rule book, preventing teams from refueling between qualifying and the race start.

That meant that the championship fight went down to the last race for the 2003 season, a shift from the year before, when Schumacher had wrapped up the driver’s title with six races left to go in the season.

Despite fighting hard with championship rivals like Juan Pablo Montoya and Kimi Raikkonen, this chassis is one of just four from the Schumacher era with five wins or more. More to the point, this is the car that was responsible for earning him his sixth world championship and helping him beat the record set decades earlier by the legendary Juan Manuel Fangio.

Sold with a Ferrari Classiche red book, it has been run for just 148 miles since the end of its racing life. Some of those miles, as you can see in the video above, were put on by Michael’s son Mick, who currently races for the Haas F1 team.

Powered by a howling 3.0-liter V10 engine, whose exhaust note pleases Mick greatly, the engine is capable of revving to 19,000 rpm and generating 845 hp (630 kW/857 PS). The engine and the car were overhauled by the Ferrari Formula 1 Clienti department this year and the F2003-GA is sold in full running order.

Being sold through RM Sotheby’s, the car is estimated to be worth $7.5 to $9.5 million, according to the auction house’s appraisers. A wildly important piece of F1 history, Michael Schumacher’s Ferrari F2003-GA will roll across the auction block on November 9, 2022.