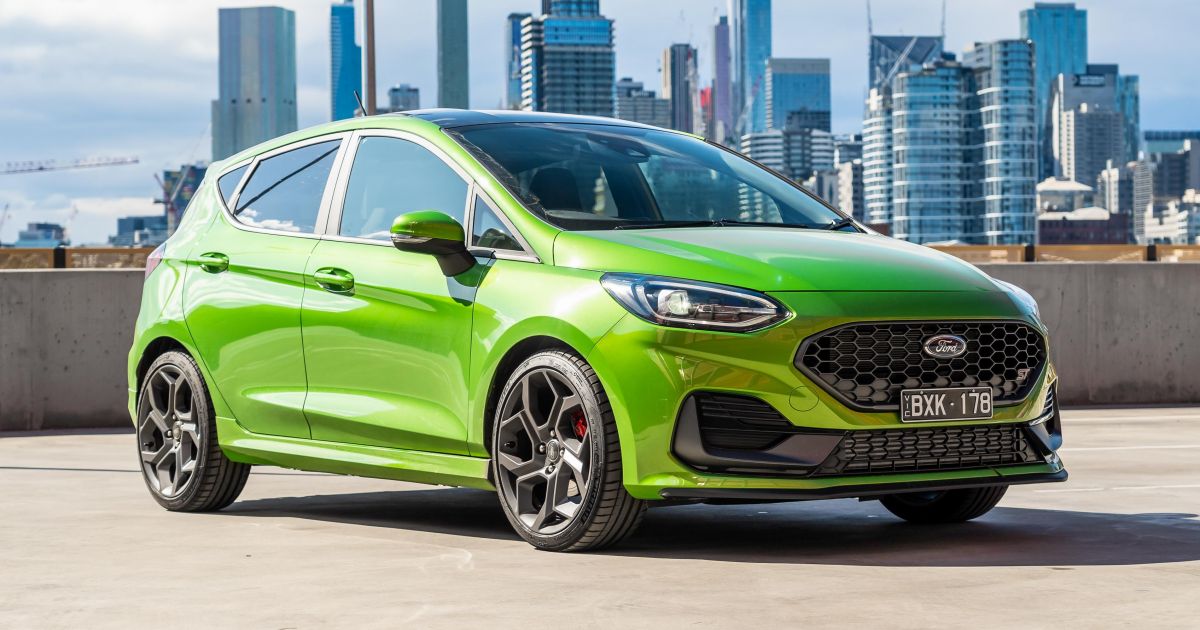 It’s time to say goodbye to one of the best hot hatches around.

Ford has confirmed the Fiesta ST (or should that be FiST?) is dead in Australia due to supply challenges in Europe where it’s built. The bigger Focus ST is also being culled.

Only a fistful of facelifted Fiestas made it to Australia before the axe fell, with a reworked look, updated interior, and more torque than before. Why are we bothering with a review of the facelifted FiST then, given it’s about to be phased out?

Ford says there’s still limited dealer stock of the car available, for one, but we also wanted to bid a proper farewell to one of the best affordable sports cars we’ve seen.

How much does the Ford Fiesta ST cost?

Like the Hyundai but unlike the Volkswagen, the Fiesta ST is manual only.

A black painted roof adds $500 to the sticker price, and premium paint is an additional $650.

What is the Ford Fiesta ST like on the inside?

A bit has changed behind the wheel with the Fiesta’s latest update. Gone are the analogue dials, replaced with a 12.3-inch digital cluster, and the Recaro seats have been subbed for Ford Performance-branded units.

The seats are still designed to hold slim drivers tightly in place, which means broad-backed owners will need to get used to being given a warm hug every time they go for a drive.

The driving position itself is decent given the Fiesta’s size, with plenty of space for tall drivers to get comfortable behind the wheel.

Although the short seat bases and tight bolstering mean it’s not the most cosseting place to spend long periods of time, you won’t arrive feeling exhausted if you’re heading beyond city limits to put the Fiesta through its paces.

All the key controls feel like quality items. The steering wheel is suitably chubby, the shift knob is finished in cold metal, and the handbrake is wrapped in soft leather.

There are plenty of hard plastics around, but that’s acceptable in an affordable, compact sports car.

The dashboard is home to an 8.0-inch touchscreen infotainment system running the same SYNC software as in the pre-update model. It’s a solid system, with simple menus and a clean layout, but it looks a bit workmanlike beside the widescreen displays that feature in the Hyundai i20 N and Volkswagen Polo GTI.

Apple CarPlay and Android Auto are wired, and CarPlay worked flawlessly during out time behind the wheel.

It’s worth noting though, the wireless phone charge slot doesn’t do a great job housing the phone if you’re plugged in for mirroring, and the cupholders aren’t shaped to make an iPhone 13 Pro Max feel welcome.

The cupholders have space for coffee cups but not larger bottles, although there is a bigger slot in the doors.

Rear seat space isn’t a strong suit in any of these city hatches, although the five-door Fiesta is usable in a pinch. Kids and smaller adults will be okay in the back, but it isn’t a welcoming space for anyone approaching fully grown.

The same caveat applies to its rivals, of course, and given the choice of sitting in the back of a FiST and a Subaru BRZ the former is absolutely preferable. With that

Boot space is 311 litres with the rear seats in place, expanding to more than 1000L with them folded.

What’s under the bonnet?

The 2022 Ford Fiesta ST is available exclusively with a turbocharged 1.5-litre three-cylinder petrol engine producing 147kW and 320Nm and mated to a six-speed manual transmission.

Power is sent to the front wheels through a mechanical limited-slip differential.

How does the Ford Fiesta ST drive?

The Fiesta ST is one of the liveliest little hatches around, but it hasn’t come at the cost of day-to-day driveability.

The diminutive engine is impressively tractable down low in the rev range, happily pulling from around 2000rpm in third, although the smartly-weighted clutch and slick six-speed manual mean working the gearbox around town is no hardship.

A dual-clutch option would be friendlier in the city, but you don’t need pumped up calves to pilot this thing in traffic. The extra hint of weight you get here relative to, say, a Hyundai i20 N actually makes the clutch easier to modulate.

With no adaptive dampers and a short wheelbase, the ride is always quite busy in the city. You’re always moving up and down, although the way the body is controlled is taut rather than harsh.

It doesn’t crash into potholes or over speed bumps, and the tight body control means this feels more purposeful than the average city hatch – which is the point, of course. It pays off when the road gets interesting, too.

On bumpy back roads, the Fiesta breathes with the surface rather than trying to batter it into submission. Rather than being deflected by mid-corner bumps, the car soaks them up and skips along.

The meaty steering immediately inspires confidence, and the nose just goes where you where you want it.

You can fling it into corners with reckless abandon and the Fiesta hangs with you, gripping up front and pivoting effortlessly. That’s down to some impressive electronic smarts backing the quality mechanicals.

Along with the mechanical limited-slip differential shuffling power to the wheel with the most grip, the Fiesta packs a brake-based torque vectoring system that nibbles away at the inside wheels to keep the car from drifting wide. You’re able to flick through three modes for the throttle and steering, too.

Despite the electronic smarts playing games in the background, the Fiesta feels entirely natural. You drive it like a classic hot hatch, turning aggressively into corners, manipulating the throttle to bring the back end into play, and then leaning on the front differential to drag you out.

There’s plenty of torque on tap to haul the FiST out of corners, and the turbocharged triple zings determinedly through the mid-range when you commit to the throttle.

Unlike some small, turbo’d engines, the EcoBoost in the Fiesta rips all the way round to its redline without running out of puff, backed by a thrumming three-cylinder sound. Despite the torque boost for 2022, it’s hard to feel much of a difference in the way the ST performs in the real world – which is no bad thing, given it was already a punchy little thing.

The six-speed manual is classic Ford Performance; super slick, and able to be flicked across the gates at light speed. The pedals are placed perfectly for rev matching, which encourages you to dive from fourth all the way down to second on tight roads, rather than just leaving the car in third.

The engine pumps out an offbeat, thrumming three-cylinder burble backed by pops and cracks in Sport Mode. It’s a smile-inducing soundtrack, and imbues the Fiesta with a unique character.

When the thrashing is over and it’s time to go home, you can slot into sixth, set the cruise to 100km/h, and relax. A hint of road roar from the low-profile Michelins sneaks in, but the engine is smooth and quiet at a cruise, and the stereo packs a punch.

Its short wheelbase means it’s not exactly a natural highway cruiser, but this city car can hack it beyond town.

What do you get?

Is the Ford Fiesta ST safe?

The Fiesta ST has yet to be tested by ANCAP or Euro NCAP, but the standard Fiesta has a five-star rating based on testing carried out in 2017.

How much does the Ford Fiesta ST cost to run?

Ford covers its range with a five-year, unlimited-kilometre warranty.

Ford offers four years of capped-price servicing. The first four services have a maximum price of $299.

The Blue Oval has very obviously focused on driving enjoyment first and foremost, but this is far from a one-trick pony. It’s a great size for city life, and wants for little when it comes to creature comforts.

It’s a shame the final Fiesta ST is a regular model – missing crucial safety equipment, at that – instead of a special edition that builds on the car’s effervescent character even further.

Still, we’ll take what we can get.