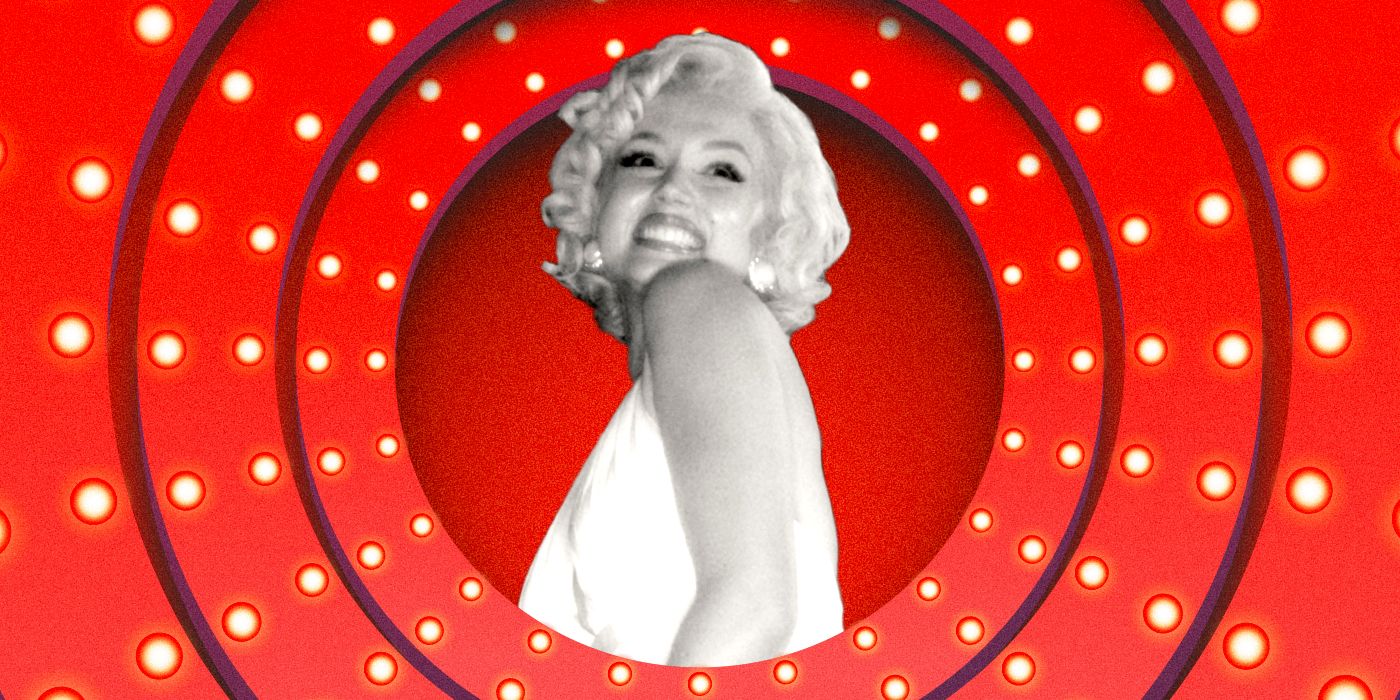 The superfluous biopic Blonde from director Andrew Dominik captured audiences in a frenzy of artistic appreciation and moral objections. Starring Ana de Armas as Marilyn Monroe, the film adapts the novel by Joyce Carol Oates. It is a visually stunning fictionalized chronicle of Monroe’s career and personal life, with a particular focus on her romantic relationships and her decline into complete alienation. What is pointedly missing from the film are Monroe’s countless achievements as well as her wit, cleverness, and dedication to her craft. Why omit such details that add layers of depth to a protagonist?

Dominik has clarified that this was not the angle that interested him, but rather to create a film that characterizes her as a symbol of our collective memory as opposed to committing her lasting legacy to film. Though this aids in an understanding as to why this film is so image-forward and underscores its brilliant use of color, recreations, and playful aspect ratios, it comes at a great cost. The portrait of Norma Jeane Baker that Dominik paints in Blonde is so narrowly focused that it ultimately lacks subtlety and balance, creating a dense and desensitizing profile of the character he’s conjured.

If anything, this film might inspire some viewers to search for what bits of truth scatter the plot of Blonde, and in doing so, they might find that her career is much more a product of her commitment and hard work than we’re led to believe. Aside from creating her own production company or fighting against communist witch-hunts and segregation, it was reported that from the early stages of her career, Monroe was incredibly savvy. One could never tell from Blonde’s depiction, which is riddled with rape and torment, but Monroe owed much of her early success to her own tenacity. For the purposes of Blonde’s “angle,” that prideful characteristic has been stripped to further propel an already cemented narrative that Monroe was fragile and naive.

Filmmaker Karen McGann (Reframed: Marilyn Monroe) observes in an interview about her documentary series that Marilyn has become a character in a story told by other people, and the narrative that she is a victim is simply more convenient. Blonde serves the purpose of “feeding a cultural need” for this invented character to stay frozen in history forever, which is why any information that doesn’t fit that narrative is excluded. Monroe was notorious for her control over her own public image. The scene in the film where her nude photos are discovered is a perfect example of only half of the story being told to foster a biased representation. We see how her then-husband, “Ex-Athlete” (Bobby Cannavale as Joe DiMaggio), reacts violently, which is the awful truth of their relationship. But we don’t see how Marilyn was advised by her studio to deny these photos. Instead, she had the self-determination to schedule her own interview and address the public in a way that she thought would paint her in the best light. Again, this raises the question of why Dominik would only choose to incorporate characteristics into his film that paint Monroe as a feeble victim when in actuality, she was a changemaker in her industry.

These choices are as McGann says, convenient, but they are also incredibly damaging. Sweeping her boldness under the rug in favor of this manipulated character strips her of her hard-earned legacy and undermines her power as well as her contributions to Hollywood. To insinuate that the film industry chewed her up and spit her out is unequivocally false, and yet this is the impression we’re given.

Once the floodgates had been opened for negative reviews, author Oates took to Twitter claiming that Dominik had told a story of sexual predation with sincerity in a post #MeToo era. The aftermath of #MeToo, however, has allowed us to recontextualize old information with new perspectives, not reinforce existing assumptions. This vital distinction is what sets the film apart from other, more astute reassessments of historical women’s trauma, even if it is a fictionalized tale. The way in which Monroe’s pain is displayed is widely regarded as exploitative, whereas others view its brashness as empathetic.

Specifically regarding her difficulties surrounding pregnancy, many filmmakers and journalists have delved into this subject and how her ongoing struggle affected her mental health, cooperation on set, and reputation. An example can be found in Netflix’s documentary, The Mystery of Marilyn Monroe: The Unheard Tapes. One of the interviewees is a friend and hairdresser, Sydney Guilaroff, who knew Marilyn for her entire career. When he was asked about her “troubles with childbearing” he replies, “I can’t say anything, and I know it all… It makes me unhappy to talk about.” This individual displays true empathy. Those that actually respected and cared for Monroe had the decency to not re-hash information that was traumatic and deeply personal, solely for the sake of entertaining others. Stories that tackle this subject matter are important, but it seems that Dominik was concerned with its salaciousness adding punch to the film over his care for the legacy of a real woman. Through his interpretation of these events, it seems as though he was treating Monroe as a vessel for him to express and project his own ideas onto her, which is a disservice to her memory.

A Hollywood Obsession With a One-Dimensional Character

Blonde has been praised for its ability to “call out the audience” for its participation in a Hollywood obsession that shaped Monroe into a one-dimensional blonde flirt, and this film does successfully deconstruct the disparities between her public and private self. In its attempt to do so, however, it becomes incredibly hypocritical. Just as Dominik criticizes the audience for demanding only one side of Monroe, he succumbs to the same set of beliefs by intentionally ignoring the many aspects of her journey that didn’t involve being betrayed and controlled by men. There is a glimpse of what an intellectual thinker she is when she auditions for the role of Nell and references a Dostoyevsky novel to which the men in the room reply “Oh, you’ve read Dostoyevsky, have you, honey? All right.”

But it is a trend within the film that her cerebral thinking is only revealed in conversations with men as she tries to impress them, notable again when she discusses Magda with “The Playwright” (Adrien Brody as Arthur Miller). In addition to refusing to remember her as the intelligent student she was, Dominik paints her as a victim of her fame, or even more insultingly, a victim of her own self-destruction as opposed to holding these institutions accountable for the way she was treated.

Yes, he details how men in positions of power abused and assaulted her, but there is no remorseful tone in the subtext of this film. It is devoid of any acknowledgment that these crimes against women were not committed by nameless ghosts of the past, and that the effects of these traumas still loom heavily over women in the industry today. In Andrew Dominik’s attempt to make a feminist film, he has contributed to the trope of infantilizing female protagonists that ought to be revered and regarded as powerful. By reducing someone’s memory to a lifelong series of maltreatment and suffering, he has aided in robbing Monroe of her personality, of everything that made her special. The scene where she first reads her lines for “Mr. Z” can be copied and pasted over the experiences of hundreds of girls, and yet Monroe is not given the opportunity in this film for her amazing qualities to reveal themselves in a way that gives her character any agency in her own story. She is tossed about like a rag doll. In fact, the film illustrates such relentless torture that by the end of its three-hour runtime the unvaried portrayal of the violence becomes repetitive and desensitizing. Just as audiences in the golden age of Hollywood were obsessed with Marilyn as a dazzling starlet, Dominik is obsessed with her victimhood. And just like the paparazzi he demonizes in the film, he profits off of a sensationalized depiction of her grief.

Blonde is overly committed to its narrow incarnation of Marilyn Monroe. The way she is written as a main character silences Marilyn’s voice in order to stay true to a fictionalized version of her. In this way, she is stripped of her hard-earned legacy, her meaningful contributions to this industry, and her dignity. As generations pass, her lasting memory becomes more and more distorted with every ill-considered interpretation of Monroe. The visual storytelling of the film “references a collective memory”, but it is a sad statement that according to this film, our collective memory doesn’t look upon her with gratitude and favor, but with pity and disappointment.

Had Dominik set out to interpret the novel with an intense focus on historical images, he still would have been able to achieve this goal without prioritizing her trauma over her triumph.