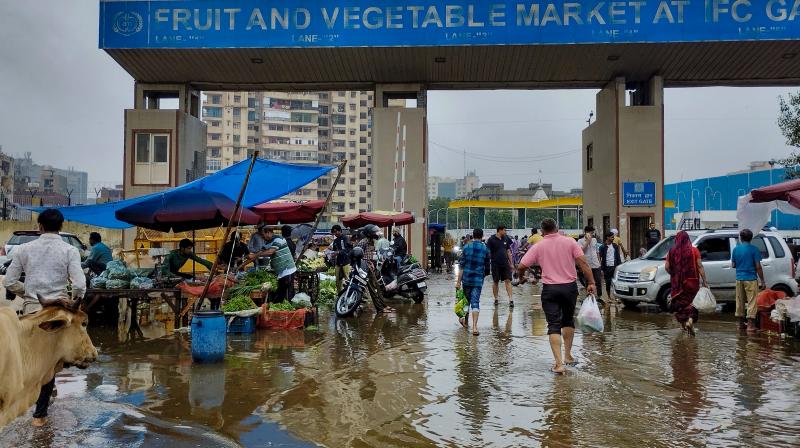 New Delhi: The national capital received the second highest rainfall since 2007 in the last 24 hours till 8.30 am, according to the India Meteorological data on Sunday.

The city weathered near ceaseless rains measuring 74mm till 8.30 am Sunday  that brought the maximum temperature on Saturday down by 10 notches, closing in the day-night temperature gap to a record low.

The current rains in Delhi are not monsoon showers, which had receded from the city on September 29 after giving 516.9 mm of rainfall against a normal of 653.6 mm, it said.

According to IMD, post-monsoon rain in the area is due to the interactions of a western disturbance which lies as a trough in mid and upper air with a deep trough of easterly wind at a lower level.

A weather official said that the easterly wind phenomenon is responsible for the very high moisture incursions – that cause rains – from Arabian Sea across Gujarat and east Rajasthan, spreading up to Uttarakhand crossing Delhi region.

The official explained that the moisture is always available at lower levels, at or near the Earth’s surface.

Western disturbance, being the upper air system, always moves west, and helps exacerbate such interactions and ultimately make all rain and clouds move north-eastwards to northeast Uttar Pradesh or Bihar.

“But for sustaining a rain spell for up to two days, those winds have linked from Arabian Sea, and that is exactly happening. In October to March normally, we get 3 to 5 such intense interactions,” the IMD official said.

Incessant rains for the second consecutive day in the national capital improved the air quality on Sunday to “satisfactory” level.

The air quality index recorded at 9 am was 54 which falls in the good category, according to the Central Pollution Control Board data.

The minimum temperature in the national capital settled at 23.4 degrees Celsius, a notch below the season’s average, the weather official said.

Earlier, the lowest such margin was recorded on October 19, 1998 at 3.1 degree Celsius, the IMD added.

The IMD has for Sunday forecast a generally cloudy sky with light rain and thundershowers at a few places.

The maximum temperature is likely to hover around 24 degrees Celsius.