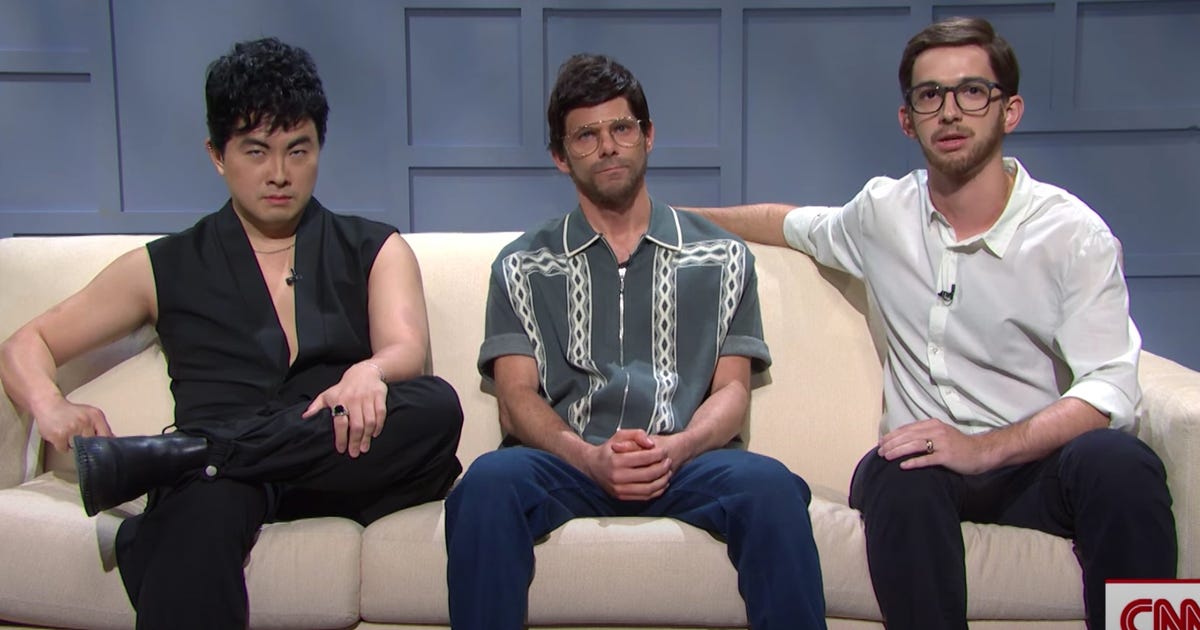 Been following the whole Try Guys situation with Ned Fulmer? So have Saturday Night Live writers, who apparently think the drama that’s befallen the popular YouTube prankster group and their former fellow member has crossed into melodrama terrain.

A skit from Saturday’s episode parodies a video in which the three remaining members of The Try Guys respond to former fellow Try Guy Fulmer being asked to leave the team after getting caught cheating on his wife with an employee.

The Try Guys — who have 8 million subscribers on YouTube — are so named for filming wacky stunts like trying on celebrity lingerie, drawing nude self-portraits and getting extremely stoned. Their actual video response to Fulmer being let go was intense, with a somber, emotional Keith Habersberger, Eugene Lee Yang and Zach Kornfeld going into more detail about the initial incident, the internal review involving HR and legal teams and the process that led to the departure.

In that video, posted earlier this week, the trio shares that Fulmer is being digitally excised from videos and removed from Try Guys merchandise. “We can’t talk about the details of the review, but suffice to say that Ned had engaged in conduct unbecoming of our team,” Habersberger says.

The SNL version kicks up the intensity a few dozen notches, with a CNN reporter played by Ego Nwodim appearing flummoxed about why The Try Guys are making headlines, and especially why a segment on President Biden’s Ukraine stance has to get interrupted to cut to breaking news of The Try Guys sitting on a couch talking about Fulmer.

“So the full story is your friend had a side chick and you fired him?” the reporter asks the three Try Guys.

“Yes, we had no choice,” says Yang’s character, who’s played by Bowen Yang. “And we hope he is somewhere on his back with a bullet in his brain and belly.”

The reporter tries to steer the newscast back to Iran being on the verge of a cultural revolution, but the three remaining Try Guys insist the cameras cut back to them so they can continue talking about the “trauma we are facing … this is the battle of our lives.”

The Try Guys launched as a Buzzfeed series in 2014, but it ultimately went independent.

One reason the story’s gotten such traction, no doubt? Fulmer was well known for being a “wife guy,” or someone who frequently spoke publicly and lovingly about his wife, Ariel Fulmer. The pair co-authored a book, and both regularly appeared on the podcast You Can Sit With Us.

The cheating story blew up after a now deleted video of Fulmer kissing a co-worker was posted online. As articles, Reddit threads and TikToks about the pairing proliferated, both Ned Fulmer and his wife released statements.

“Family should have always been my priority, but I lost focus and had a consensual workplace relationship,” Ned Fulmer’s statement reads. “I’m sorry for any pain that my actions may have caused to the guys and the fans but most of all to Ariel. The only thing that matters right now is my marriage and my children, and that’s where I am going to focus my attention.”