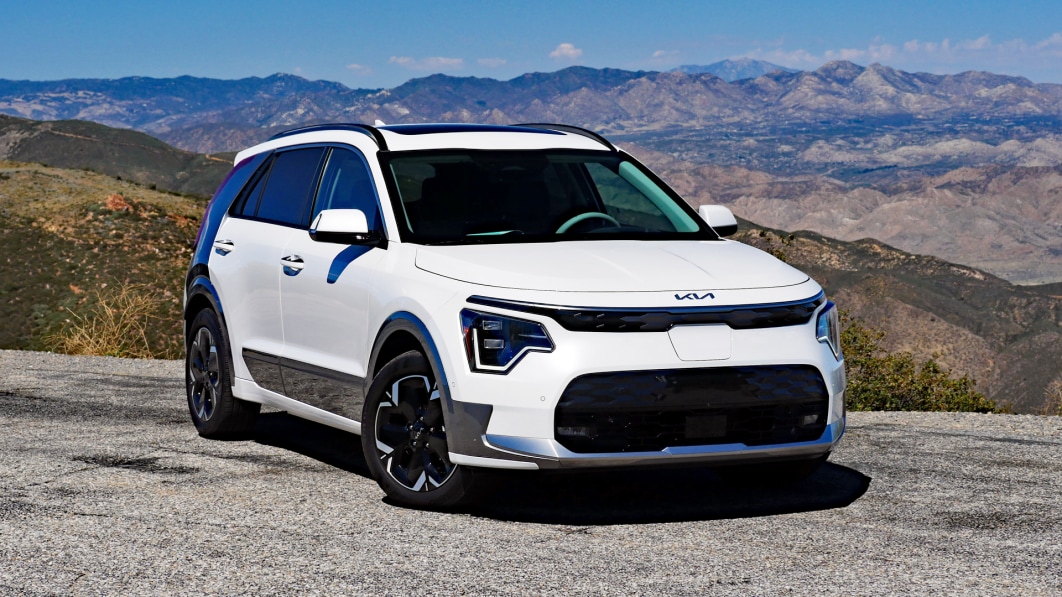 ENCINITAS, Calif. – The timing couldn’t possibly be better for an all-new, next-generation 2023 Kia Niro. The recipe is just the same as it was previously: a small crossover SUV offered with a choice of hybrid, plug-in hybrid or all-electric powertrains. Yet the market environment has dramatically changed. The demand for electrified SUVs, including ones made by Kia, has been driven skyward by soaring gas prices, increasing environmental awareness and better products. At the same time, demand for hybrid cars has diminished, opening the door further for what was once an oddball in the segment.

In fact, the previous-generation Niro enjoyed its best sales last year despite its advanced age and looking awfully frumpy compared to the rest of Kia’s sleek SUV fleet. The new styling alone should be enough to keep those fortunes ascendant. The PHEV and HEV differ slightly from the EV (note its nose-like, center charge door), but the common combination of narrow upper grille slit, LED lighting cluster and larger lower grille create a cool, streamlined look. There’s more tastefully applied LED lighting at the rear, including the new high-mounted taillights that bracket the Niro’s most notable styling element: the Aero Blade. It will be available in gloss black or body color in the PHEV and HEV, while the Niro EV gets the choice of Steel Grey (pictured) or black. The expanse of lower trim is usually gloss black, with the exception of the EV, which is eligible for the silver trim seen in the below photos. Kia had not announced the exact combinations of exterior paint, blade color and trim level at the time of this writing.

Thankfully, the rest of the updated Niro’s specs are available to peruse. It’s slightly bigger, for one, with an extra 2.5 inches of overall length and nearly an inch of wheelbase added. That means the Niro is basically the same length as the Kia Seltos, but has a back seat that’s actually closer to the newly enlarged 2023 Sportage that strains the definition of “compact.” On paper at least, the Niro now has a bigger back seat than the Kia EV6 – that’s hard to believe in person, but at the very least, a 6-foot-3 passenger could sit behind his own driver seat position. It’s definitely airier back there, and visibility in general is superior.

The 2023 Kia Niro hybrid powertrain is basically carried over from before. It is once again a combination of a 1.6-liter naturally aspirated inline-four (unlike the Sportage’s turbo) and a 43-horsepower electric motor integrated with a six-speed dual-clutch automated manual transmission. Every Niro is front-wheel-drive. Total system output is the same 139 hp and 195 pound-feet of torque as before, though a lower curb weight likely contributes to the 0-62-mph time being reduced from a glacial 11.5 seconds to a snail-like 10.4. The battery also packs more energy, and most importantly, the 2023 Niro hybrid is more efficient. Estimated fuel economy is 53 mpg city, 54 mpg highway and 53 mpg combined in the LX, EX and SX trims, and 53/45/49 with the EX Touring and SX Touring. The old Niro topped out at 50 combined or 43 on ritzier trims. If you’re wondering, most versions of the Prius return 52 combined.

Like other Kia/Hyundai hybrids, this one benefits from a geared transmission that makes it feel a lot more normal to drive than anything with one of Toyota’s CVT-like hybrid transmissions. It’ll even maintain a lower gear for an extended period of time when you pull on a paddle shifter. The electric motor is always present when you lay into the throttle, providing smooth electric torque and minimizing how much you hear the rather thrashy small-displacement inline-four.

The Niro PHEV takes that basic powertrain setup, but adds a more powerful motor – 83 hp, which is not only greater than the HEV’s but 23 hp more than the previous-generation PHEV. This helps shave a few more ticks off that 0-62 time (9.6 or 9.8 seconds depending on trim level) despite a bigger, heavier battery. It’s packed with 11.1 kWh of juice versus the HEV’s 1.56 kWh and the previous-generation PHEV’s 8.9 kWh. A full charge yields an EPA-estimated 33 miles (versus 26 last year), which can be replenished in less than 3 hours using a 240-volt outlet.

We only got a brief taste of the PHEV and, because of the logistics involved with first drive events (we doubt you care), cannot report how it drives in all-electric mode. With the electric range at 0, it unsurprisingly drove like the hybrid. With range left, the gas engine will still kick on should you lay on the throttle as it does in the Sorento Plug-in Hybrid. It would behave most of the time as an EV, though, meaning the Niro PHEV is a good choice for those with short commutes and without a second-car alternative for longer road trips (although the smaller cargo capacity puts a damper on that).

Now, the 2023 Kia Niro EV does have a range estimate of 253 miles, which exceeds many pricier EVs. It’s 6 miles better than its closest competitor, the Chevrolet Bolt EUV, and much better than the 232-mile Standard Range EV6. It’s 50 miles less than the Long Range RWD EV6, but the bigger deal is that the Niro lacks the EV6’s state-of-the-art charging capabilities. It tops out at a maximum charging capability of 85 kW, which may be better than a Bolt’s 68 kWh, but is dwarfed by the EV6 Standard Range at 180 kW and Long Range at a blistering 240 kW. For perspective, the quickest you can recharge a Niro from 10-80% is 45 minutes. That’s better than before, but the EV6 can get it done in 18. Admittedly, that’s with a rare 350-kW charge station, but still, you’re going to be out of that Walmart parking lot sooner with an EV6 than you are in a Niro EV.

OK, enough with the technobabble.

The Niro EV does not have that accelerative snap you get with more powerful EVs, but there’s still more than enough low- and mid-range punch for those “buh-bye” moments on highway on-ramps or when passing to slingshot away from pokier traffic. It feels like a quick car even if its 0-60 time of 7.8 seconds isn’t going to wow anyone (the single-motor EV6 Wind is only good for 7.2 seconds, by the way). Engineers seemed to have limited the amount of torque instantly available from a stop, which helps prevent torque steer, but gunning the throttle mid-corner will still make the wheel tug a bit.

The Niro EV also feels substantially smaller and more agile than the EV6, which looks sporty, but ultimately feels like a big, heavy cruiser. Popping the Niro in Sport mode sharpens throttle response and tightens the steering a smidgen, just enough to put a smile on your face. The rest of the time, it’s the type of smooth operator you expect from commuter EV, although the amount of interior noise is definitely more in keeping with a Bolt than an EV6, Ioniq 5 or Mach-E.

The Niro hybrid is not surprisingly the most playful of the bunch as it weighs the least, and it sure feels like you could coax some lift-throttle oversteer out of it if you were feeling frisky. None of the Niros possess steering worth writing home about, and could certainly use more feedback, but it’s reassuring enough on center. There were no issues detected with ride quality, either, no doubt helped by the fact every Niro rides on 16-, 17- or 18-inch wheels depending on powertrain and trim level. Yay sidewall.

The electrified powertrains aren’t the only earth-friendly things about the Niro as the interior boasts numerous newfangled eco materials. The headliner is made of recycled wallpaper (below right), which contains 56% reused polyester fibers. That’s good to hear, because it otherwise looks a bit cheap and feels even cheaper. The door panels are covered in a paint free from benzene, toluene and xylene isomers (BTX-free), which minimizes environmental impact and waste. The seats are covered by a bio-polyurethane and Tencel material made from eucalyptus leaves. Hopefully a koala wasn’t starved to make it. The resulting upholstery looks like a mix of fabric and leather, but is in fact 100% vinyl … or whatever. Ultimately, it looks and feels nicer than a lot of the fake leather stuff out there.

The rest of the cabin benefits from the various controls and interfaces that trickle down from elsewhere in the Kia lineup. Indeed, the resulting overall look is best described as a simpler, more budget-conscience version of the EV6 cabin. Everything we’ve said about the excellent, user-friendly 10.25-inch touchscreens in the EV6 and Sportage also apply when found in upper Niro trim levels. The accompanying 10.25-inch all-digital instrument panel features different design options – the PHEV and Hybrid seem to share their very-digital designs with the Sorento PHEV, while the Niro EV shares the Sportage Hybrid’s selection of analog-look gauges. All of Kia’s latest driver assistance tech is also available, including the top-of-the-line Highway Driving Assistant II that includes partially automated lane changes. Just tap the turn signal, keep a finger on the wheel and the car will do the rest. Of course, the Bolt EUV is available with Super Cruise, but the differences aren’t that great.

The same almost certainly can’t be said for price, and although we don’t have figures for all versions, it sure seems problematic. The outgoing ’22 Kia Niro EV started at $41,285, including destination, while the 2023 Bolt EUV starts at $28,195. The new Niro EV sure seems like the better, more appealing vehicle, but not by that much if the price remains similar. Oh, and the Inflation Reduction Act applies (for now) a cool $7,500 rebate to the Bolt while taking it away from the Niro. A conspiracy theorist might say that Kia is waiting to see if industry and diplomatic pressure can alter the implementation of the new rules, because pricing for the 2023 Niro EV was conspicuously not provided during the first drive event. If the rebates go away and the Niro EV gets more expensive as every new car is apt to do, then it’s a hard choice to justify over a Bolt. There’s also the matter of how close it gets to the bigger, more advanced EV6 that starts at either $42,115 (Standard battery) or $48,215 (Long-Range RWD).

It would obviously be more than the PHEV, which starts at the EX trim level with a price of $35,035, or $4,750 greater than the base Sportage PHEV trim level, the X-Line. The loaded Niro PHEV SX Touring has an MSRP of $40,785, or $3,500 more than the top-of-the-line plug-in Sportage. That feels about right, but not so the hybrid. Its pricing is a real head-scratcher. The base LX hybrid starts at $27,785, including destination, which is only $800 less than a base Sportage Hybrid LX. Our loaded SX Prestige tester stickered at $36,435, which is only $1,500 less than a loaded Sportage Hybrid. Maybe we’re just looking at Kia realistically pricing the Niro in light of dealer markups on the Sportage, but still. There’s no way the gap between the two should be that tight.

So pricing could be a great big iceberg or an equally big question mark, and either way, it lingers over what is otherwise an appealing little car perfectly suited for today’s tastes and trends. We wish we could give it a ringing endorsement, but there’s too much up in the air.