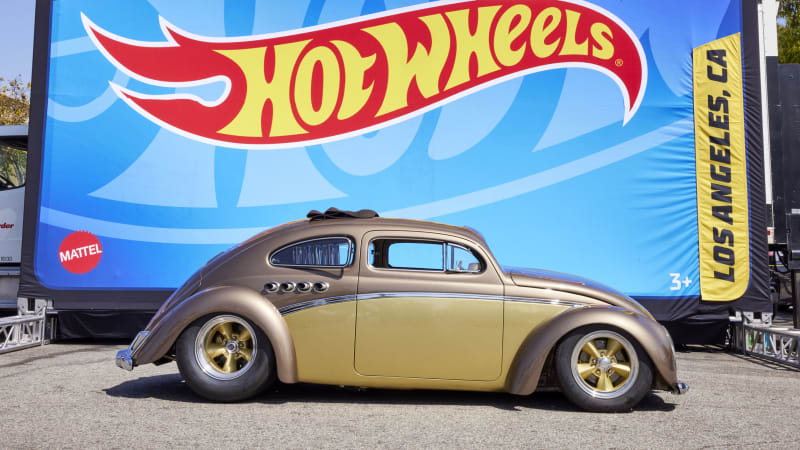 Hot Wheels has selected a 1956 Volkswagen Beetle as a finalist in the 2022 Legends Tour. While this is the second Beetle chosen for the semifinal round, it’s a one-of-a-kind, heavily-modified car that’s nicknamed “Berlin Buick” and powered by a mid-mounted V8 engine.

Owner Rob Freeman drove from Syracuse, New York, to Southern California to compete in the 2022 Legends Tour’s Los Angeles stop. He told Hot Wheels that he began toying around with the idea of building a Beetle with a mid-mounted engine when he was a kid. He started the project many years later by buying a 1956 oval-window model for $1,000 and yanking out the factory-fitted air-cooled flat-four engine.

He chose to power the Beetle with a Buick-sourced, 215-cubic-inch (3.5-liter) V8 because it’s an engine that’s relatively compact and light ⁠— these attributes also explain why evolutions of this eight powered a long list of European cars for decades, though Volkswagen never used it. The V8 is mounted behind the front seats, in the space formerly occupied by the rear bench, and it sends 300 horsepower to the huge rear wheels via a manual transmission. The list of modifications also includes a custom-made independent rear suspension system.

With the powertrain sorted, Freeman turned his attention to the body. He lowered the roof by about four inches, removed the running boards, and went as far as fitting chrome side trim sourced from a 1957 Buick. The exhaust system is one of the coolest modifications made to this Beetle: The V8 exhales through eight outlets (four per side) shaped like the portholes that Buick fitted to some of its cars in the early 1950s.

Open the suicide doors, peek inside, and you’ll spot a steering wheel and dashboard parts donated by a 1949 Buick. Custom upholstery lines the seats, the door panels, and the floors, and the engine is installed just a couple of inches away from the passengers.

Freeman’s Beetle will compete in one of the semifinal rounds scheduled for later in 2022 for the chance to join the Hot Wheels catalog of 1/64-scale diecast models, meaning it could find its way to your local toy store (and ultimately to your desk) in the not-too-distant future. To win, it will need to fend off competition from a growing list of competitors including a Porsche 928-based, 3,000-plus-horsepower dragster, a 1968 Volkswagen Beetle powered by a Volvo-sourced engine, and a turbodiesel-powered 1931 Dodge Rat Rod built as a family project.

Some of the Berlin Buick’s competition will come from abroad. While this heavily-modified Beetle was basking under the California sun, a panel of judges that includes former Jaguar Land Rover designer Ian Callum chose a 1963 Ford Anglia-based hot rod (shown above) to represent the United Kingdom in the 2022 Legends Tour. Called “The Misfit” and built by Michael Charalambous, it’s powered by a supercharged BMW 3 Series-sourced engine and built on a custom-made chassis that incorporates Ford and Hillman Imp parts.