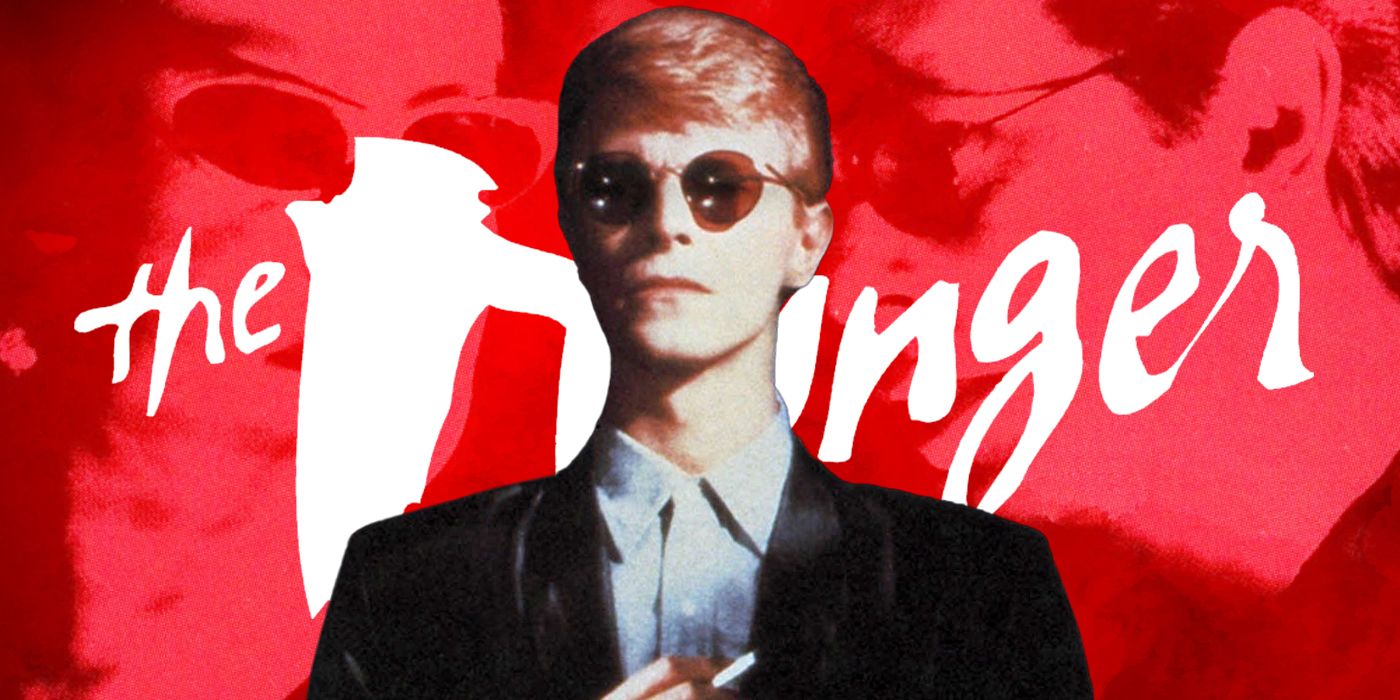 It’s six minutes of mind-swirling imagery, dizzying lighting, and frenzied editing set to an ominous goth rock anthem, and it’s one of the most incredible opening sequences ever put on film. Two figures dressed in black and disguised behind sunglasses (Catherine Deneuve and David Bowie) move in the smoky shadows, spotting a young couple on a crowded dance club floor. A visual seduction of the couple begins as the camera cuts back and forth to punk band Bauhaus’ lead vocalist Peter Murphy, looking bat-like behind a wire cage, singing “Bela Lugosi’s Dead” in a deep, throaty bass. The action moves to the young couple’s home as the seduction continues, culminating in a shocking moment of bloody violence as Deneuve and Bowie suddenly slash the couple’s throats. From the moment the 1983 horror masterpiece The Hunger begins, director Tony Scott, cinematographer Stephen Goldblatt, and music composers Denny Jaeger and Michel Rubini waste no time in letting audiences know they’re about to experience a piece of master-crafted art.

Nearly 40 years since its original release, The Hunger remains the finest example of how a horror film about modern-day Manhattan vampires could also be a magnum opus of sensational, sensuous grandeur.

Scott was intent on making a film that was as gorgeous as it was frightening, starting with the casting of his lead actors. As the matriarchal vampiress Miriam Blaylock, Deneuve, with her heart-stopping beauty and flawless porcelain skin, is an artist’s perfect subject. Her unapproachable, icy countenance makes her alluring, yet intimidating. She’s hiding something behind her impeccable facade, but it’s something one may not want to know.

Oscar-winning costume designer Milena Canonero (Barry Lyndon, Marie Antoinette) emphasizes the mystery by dressing Miriam in lace veils that obscure her face, hats that provide a shadowed silhouette, and classically tailored suits that emphasize Miriam’s literal timelessness. As Miriam’s partner John, David Bowie has just the right measure of androgynous loveliness and vampire-like danger. With one eye that’s steel-blue and one that’s deep brown, John is an otherworldly character, a man who exists in his own unique dimension. In contrast to Miriam and John, Susan Sarandon, as Sarah Roberts, is the lab-coated professional with the playful semi-punk hair. A dedicated doctor studying the aging process, she’s a professional by day, but with a hint of a naughty streak by night. When Sarah becomes entwined in the lives of Miriam and John, Scott crafts their narrative like a ballet fraught with temptation and tension.

The Juxtaposition of Beauty and Violence

Cinematographer Goldblatt frames virtually every shot in The Hunger like an elegant oil painting come to life. The camera pans across the interior of Miriam’s and John’s sprawling brownstone like the tip of an artist’s brush, white lace curtains ruffling from the breeze of the open windows, the expansive marble staircase bathed in bluish shadowed hues and a faint background mist, the home’s accentuated hallway arches and columns denoting old money wealth and modern sophistication.

At the same time, Miriam and John have a bland, gray, concrete basement with an incinerator where they dump the bodies of the victims upon which they feast in order to maintain their eternal youth. This jarring juxtaposition of the beautiful against the horrifying is a recurring theme throughout The Hunger. As viewers are seduced by the exquisite and the serene, they’re suddenly jolted into terror and darkness. When John begins to age rapidly within a matter of hours, his striking beauty replaced by sagging skin and sunken eyes, the landscape around him changes, too. John moves from the splendor of the brownstone to the cold, stone walls of Sarah’s medical clinic, then to the steel-gray skies and gritty rain-soaked streets of New York City.

The musical score of Jaeger and Rubini also accentuates these startling shifts in tone, segueing from the classical sounds of violins and cellos to the modern sounds of electronic synthesizers. This contrast is emphasized in a particularly cruel and heartbreaking scene involving Miriam’s and John’s 15-year-old violin student Alice (Beth Ehlers). As Alice plays a classic Édouard Lalo piece, John, in a desperate attempt to keep himself alive, slashes her throat. A splash of deep red blood lands on a page of Alice’s white sheet music. It’s as if director Scott is reminding viewers of the thin line between tranquility and brutality, pleasure and pain. Scott and Goldblatt also merge religious symbolism against Luciferian themes in the film, particularly in the scene where David meets his ultimate fate. As Miriam carries David, now aged a century in the span of a single day, to his eternal resting place in the attic, Goldblatt creates a living rendition of Michelangelo’s La Pietà. Holding the nearly lifeless David in her arms as a haze of white light descends from above, Miriam resembles the Virgin Mary cradling Jesus Christ after his crucifixion. But instead of ascending to heaven like Christ, David remains in a state of eternal purgatory, unable to die and escape endless torture.

The Hunger‘s union of cinematic and musical artistry reaches its peak in the pivotal seduction scene between Miriam and Sarah. Miriam serves Sarah a special sherry in a delicate crystal glass, then sits down at the piano and plays Léo Delibes’ “Lakmé Flower Duet” while Sarah becomes enraptured by the sounds and sensations they convey. Soon, the two women are in bed together, and once again, Scott stages the moment like a painting, with Miriam and Sarah entwined on pristine white sheets as mesh curtains drift around them, the “Flower Duet” continuing to play in the background. Incidentally, in a 2009 interview about this seduction scene, Sarandon discussed how she and Deneuve collaborated with director Scott to bring a sense of artistry and eroticism to the scene. Sarandon also humorously noted what she said to Scott: “You know, I’m sorry, but do you really need to be drunk to go to bed with Catherine Deneuve? Wouldn’t it be much more interesting if I went to bed with her because I chose to? And because she’s hot, and I want to?”

In the midst of this highly charged bit of erotica, Miriam bites Sarah’s arm and blood flows from Sarah as the classical music turns to ominous electronica. The audience is once again jolted from its halcyon haze to the realization that Miriam has infused Sarah with something foreign, something unsafe. Although The Hunger was made in 1983, several years before AIDS would be widely acknowledged as a global health emergency, watching the scene today, it could almost serve as a metaphor — a person whose blood becomes infected with a contaminant that will forever alter their life.

The Broken Chain of Eternal Life

Scott and Goldblatt craft a stunning mise-en-scène of aesthetic beauty versus grisly violence in the film’s climax, when Sarah, fighting against Miriam’s control, slits her own throat with the blade from Miriam’s Egyptian Ankh necklace, unleashing all of Miriam’s cursed undead lovers who are hidden away in the attic. As a blood-drenched Sarah lay dying before her, Miriam’s eternal beauty begins to die as well, her face and body swiftly decaying while the ghastly undead surround her. A flock of white doves, symbols of peace and renewal, gathers around the gruesome scene as Miriam fades away. Miriam’s final slow motion plunge from the top of a staircase is beautiful in its own horrifying way — a being once so angelic in her appearance slowly falling into a hideous eternal hell of her own making. Sarah’s subsequent rebirth as Miriam’s successor gives meaning to the doves that previously encircled her bloodied body.

In the early 1980s, the horror genre was dominated by low-budget slasher films like the Friday the 13th and Halloween franchises. The Hunger was that rare entry that stepped out of the boundaries and dared to give audiences a more sophisticated movie experience while still delivering the “peek between your fingers” moments of terror. Its influence can be seen in more recent horror films like Ari Aster’s Midsommar and Luca Guadagnino’s 2018 remake of Suspiria. Even Ryan Murphy paid homage to The Hunger in the 2016 season of TV’s American Horror Story: Hotel, with Lady Gaga as a Miriam Blaylock-like character. The Hunger has earned its place as a classic, and 39 years later, it remains a stunning example of how a horror film can also be a work of high art.