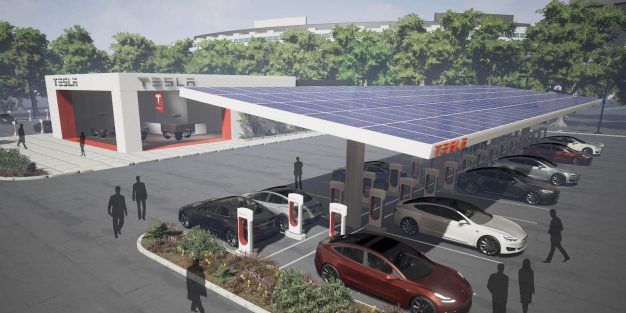 Tesla is getting ready to add almost 350 Supercharger stations in the United States and dozens more around the world. The company didn’t make any official announcement about its plan, but astute watchers of the electric vehicle company noticed a slew of “coming soon” additions that briefly appeared on the company website’s official list of locations.

Tesla has since removed the specific addresses from its site, adding to the suggestions that were made when the list was first posted that this might have been an accidental leak. Whatever the reason, we can now say there are 342 new locations on Tesla’s U.S. list, including Dothan, Alabama, and Lagrangeville, New York. Tesla operates more than 35,000 Supercharger units around the world.

The since-removed new Supercharger locations were first spotted by Twitter user MarcoRPTesla, who calls his feed there “unofficially the best account for Supercharger updates in North America.” It’s certainly full of interesting details about the company’s DC fast-charging network. Speculation about why Tesla might want to publicize where it’s about to install new fast-charging locations for its users ranges from building up interest in EVs in a particular area to providing people in that area confidence that they’ll be able to fast-charge when driving around.

Supercharger station expansion can be important information to electric-vehicle drivers who don’t own a Tesla. Since the first Superchargers were installed in 2012, the stations have only officially worked with Tesla EVs because they had a proprietary connector. The company took the first steps toward last year by adding a standard CCS connector to a small number of units in Europe. CEO Elon Musk has said since at least June 2021 that the Supercharger network will be opened to other automakers, and Tesla launched its non-Tesla Supercharger pilot program in November 2021. This program is not yet available in the U.S. but a White House fact sheet issued in June said, “Tesla will begin production of new Supercharger equipment that will enable non-Tesla EV drivers in North America to use Tesla Superchargers” before the end of 2022.