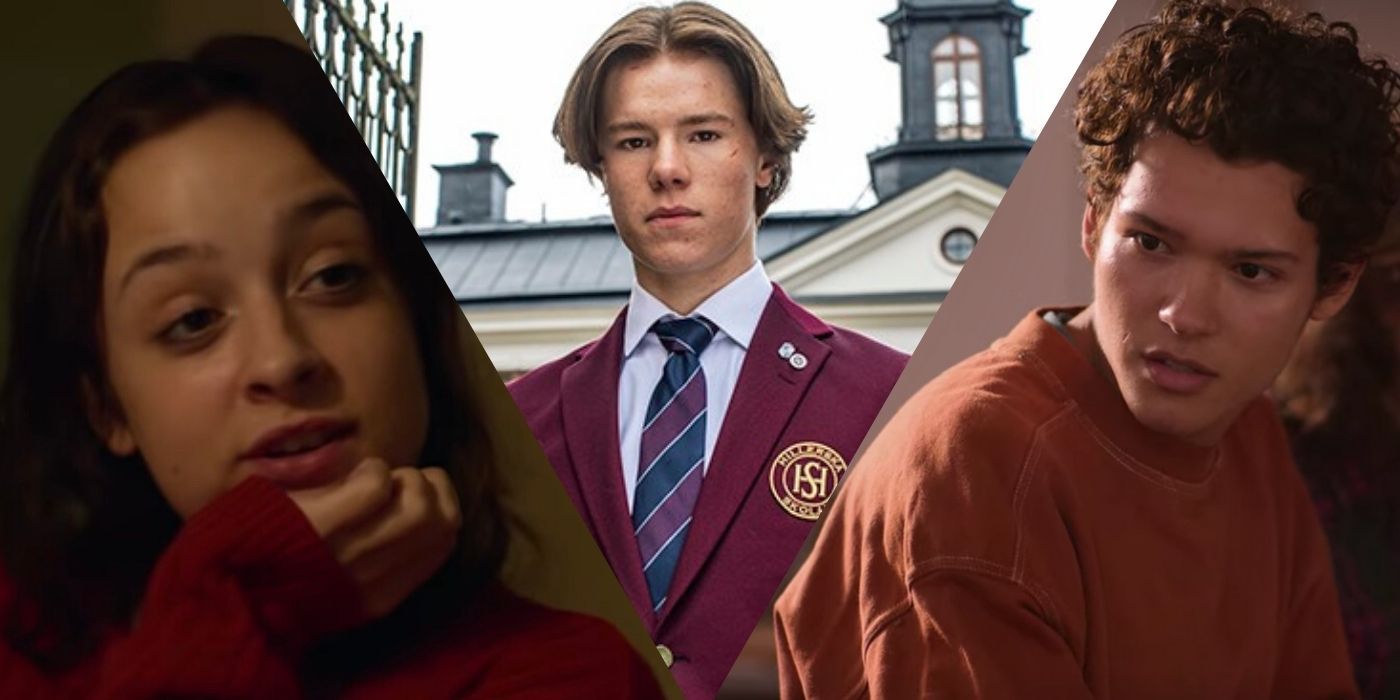 Less than a month after its release on Netflix in 2021, Young Royals has cultivated a loyal and strong fanbase among subscribers – a feat that should be celebrated since the show is one of Netflix’s foreign-language titles and comes from Sweden, though dubbed versions are available.

The teen drama series centers on Prince Wilhelm, a young prince who gets sent to a boarding school after a scandal tarnishes his reputation. Things only get worse for Wilhelm when he moves up in the royal succession, becoming the next in line to the throne. Like most teen dramas, Young Royals has a fun and eccentric teen ensemble group that ranges from selfish to selfless.

Updated on November 18th, 2022 by Danielle Bruncati: Young Royals released its highly anticipated second season on November 1st, and fans can’t get enough of the royal teen drama. The drama is certainly upped this season as the characters deal with the aftermath of the leaked sex tape now that they are back at school for the year. With tensions running high and the fate of Sweden in Wilhelm’s hands, he’s under more pressure than every, which causes him to act in questionable ways. Wilhelm isn’t the only beloved character who turns morally gray this season, as several characters follow a similar arc while others double down on their evilness. And to make things even more exciting, several new faces join the mix adding for more drama.

August prides himself on being the “it” kid of Hillerska, but really he’s a self-obsessed pseudo-royal. After his attempts to take his cousin Wilhelm under his wing fail, he lashes out and, ultimately, ruins Wilhelm’s life by leaking the video of him and Simon having sex.

He only gets worse in season two when he refuses to come clean about being the one who leaked the tape and, instead, starts a relationship with Simon’s sister. To make things worse, he gets named Wilhelm’s successor, which only makes him more power-hungry and more sinister. The only thing August is King at is ruining people’s lives.

Jan Olaf began appearing in season two as a trusted royal advisor to the Queen and her family. Though he works for the royal family, he is more interested in protecting the royal court and the family’s image than actually caring about the family.

This is proven when Jan Olaf refuses to let the Hillerska choir sing the song Simon wrote because he thinks it’ll paint Wilhelm in a bad light. He also is quick to get in good with August because he doesn’t believe Wilhelm has what it takes to be the next King of Sweden. The addition of Jan Olaf has given Young Royals another great antagonist.

Sara is an interesting character because she sits in the gray area, not the best and not the worst, but rather somewhere in the middle. Sara spends most of the first season befriending Felice as she helps her take care of her horse, whom she loves. However, as the series progress, Sara finds herself in a sticky situation when she witnesses August leaking the tape of her brother and Wilhelm. Instead of turning him in, she instead blackmails him for her own advantage.

In season two, Sara doubles down on being a good sister and falls in love with August. She doesn’t back Simon up when he needs her to and only admits to her mistakes when she’s been caught red-handed. She also becomes more of a selfish character this season, lashing out at Felice when she doesn’t get her way about the sale of Felice’s horse.

The best moms on TV and in real life are kind, caring, and supportive. Unfortunately, none of those words describe Smysan, Felice’s mother. Smysan isn’t the best because she’s a good character but rather because she makes for a great antagonist.

Though it’s clear she does love Felice, she is more concerned with Felice being a carbon copy of her than letting her grow into her own person. As if that’s not bad enough, she’s also hard on Felice when it comes to her weight and body image.

Queen Kristina was extremely harsh in season one. She ran a tight ship, especially when it came to her family, and went as far as convincing Wilhelm to deny his involvement with Simon to keep the royal name free of scandal.

However, in season two, fans see a softer side of Queen Kristina. She tells Wilhelm that she accepts him for who she is and promises that he can come out when he’s 18. She also checks in on him regularly, not just for royal duties, and encourages him to see a therapist.

Vincent is one of August’s best friends at the boarding school, who takes on a much more important role in season two. After Wilhelm convinces the seniors to oust August as Prefect, Vincent takes over. Unlike August, he’s not easily manipulated and plans to run a tight ship.

Unfortunately, Vincent loses out on being a great character because he’s obsessed with tradition to a fault. He also doesn’t know how to read his classmates and forces Wilhelm into admitting things he would rather keep secret on more than one occasion.

Alexander finds himself being the scapegoat in season one when Wilhelm pins a drug allegation on Alexander instead of Simon, who August wants to blame. Thus, he is momentarily expelled from the best boarding school in Sweden but ends up reinstated in season two.

In season two, Alexander continues being a perfect character and amazing friend until he learns that Wilhelm is the one who caused his expulsion. Armed with that information, it’s easy for August to manipulate him into taking the blame for filming the sex tape if Simon goes to the police. Thus, Alexander goes from a great character to one who is morally gray because of how quick he is to go down for someone like August under the guise of getting to be protected later on.

In season two, Ayub and Rosh continue to support Simon by encouraging him to move on from Wilhelm since they’ll never be able to be public together. Though, they might be a bit misguided at times. They’re always there to support Simon when he needs them.

As the main love interest of Young Royals, Simon is definitely one of the best characters and a fan favorite. While Simon has his flaws, he’s also a supportive brother and friend. He’s there for Wilhlem even when he doesn’t have to be but he also doesn’t let his love blind him from ensuring his own happiness — which makes him one of the best teen boyfriends on TV.

However, in season two, things get a bit muddy for Simon as he begins to act out of jealousy instead of love. He uses Marcus as a pawn against Wilhelm and lashes out at those around him because he’s unable to process his own emotions.

Prince Wilhelm is definitely the main character in Young Royals but that doesn’t mean he’s the best. He is a character that fans can’t help but support and root for, though. Over the course of the first season, Wilhelm goes through a lot of changes. Enrolling at the boarding school, losing his brother, and exploring his sexuality and a flourishing relationship with Simon. Wilhelm might not always make the right choices, but he does try to do what everyone thinks is the best.

RELATED: The Crown & 9 Other Great Shows About Royalty, Ranked According To IMDb

In season two, Wilhelm continues to make questionable choices by pettily going after August instead of turning him in to the police. His feelings for Simon cause him to act rashly on occasions, and though he doesn’t mean too, he accidentally drags Felice into the crossfire with him. Wilhelm gets a bit of a pass, though, because of the immense pressure he’s under as the Crowned Prince.

On the surface, Felice may seem like just another wealthy boarding school student, but she turns out to be so much more than that. As the show progresses, she begins to open up, and everyone gets to see her true colors. Felice is one of the first people to befriend Sara and helps her integrate with her own friends. She also fully supports Wilhelm and Simon, despite having had a crush on Wilhelm for years. Felice also learns to stand up for herself, which is just as important as being a good friend.

Felice ends up having one of the best character arcs in season 2 when she continues to fight for what she wants instead of what everyone else wants for her. The opposite of August, Felice’s selfishness this season comes in the form of protecting herself instead of trying to work her way to the top like August does.

Though his time on Young Royals is short, Prince Erik definitely made an impression on fans and is certainly one of the best characters on the show. Unlike most royal older siblings, Erik doesn’t think he’s better than Wilhelm.

In fact, Erik is so supportive of Wilhelm that he’s the one who takes him to the boarding school on his first day to help him get situated. He’s also the only family member that regularly calls Wilhelm to check up on him.

Linda not only wins the “mother of the year” award among the various Young Royals moms, but she’s one of the best characters on the show. At the end of the day, Linda just wants what is best for Simon and Sara.

She manages to enroll them in the prestigious and expensive boarding school despite their less-than-ideal financial situation because she knows it’ll be good for them. She’s blindly supportive of both Sara and Simon, even when he brings home the Prince of Sweden. And she doesn’t play favorites among her children, calling them both out when they’re lashing out at each other. And in season 2, she’s fully on board with whatever Simon wants to do regarding the sex tape.

Marcus is the newest face in Young Royals during season two. Though not a student at Hillerska, he works at the adjacent stables and on the shooting range. He quickly befriends Simon and the two begin an on-and-off again relationship as Simon struggles to work through his feelings for Wilhelm.

Despite being used as a rebound, Marcus remains a good and honest character. He only lashes out at Simon when he learns about Simon’s cheating, but up until that point, he’s extremely loyal and supportive of Simon. Marcus is a good friend and the one who will always be there when things get bad.